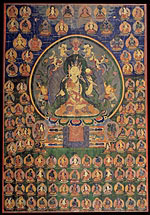 NEW YORK—A new exhibit at the Rubin Museum of Art in Manhattan highlights a lesser-known aspect of Himalayan culture—female Buddhas.

"Different types of Buddhas appear in female forms, depending upon the perceived needs of the being seeking enlightenment," Jeff Watt, senior curator at the Rubin Museum, said in an interview.

"If your personality and your makeup are more attuned to female figures, then surely you [should] follow the female deities," said Watt, who curated "Female Buddhas: Women of Enlightenment in Himalayan Art" with Glenn Mullin.

"We were looking for a different and unique idea for an exhibition," Watt said, and so they settled on female Buddhas, in part because "the art is so strong."

The exhibit, which opened in June, is scheduled to continue through January 2006. It includes some 50 works of art including sculptures, paintings, and textiles created from the 14th through the 19th centuries.

Many paths to enlightenment

"In Hinduism and Buddhism, they say there are as many different ways of reaching enlightenment as there are different sentient creatures in the universe. Teachings are personified as deities, who don’t exist per se ," Watt said.

Female Buddhas derive from northern Mahayana Buddhism, rather than the Theravada Buddhism practiced in Southeast Asia.

In one of the Buddhist sacred texts, said to have been spoken aloud by the Buddha in an earthly form, "we have the first female Buddha, named Tara, who vowed…always to appear in a female form," Watt said.

"Humans are said to be too attached to a single form, with one face and two arms," he said.

Buddhist manuals that teach philosophy, meditation, and yoga recommend instead that practitioners meditate on different forms, with various symbolic meanings.

Tara and the Red Yogini

The most common female Buddha is Tara, followed by the Red Yogini, Watt said.

Response to the exhibit "has been very, very good," he said. "We’ve had lots of international visitors, people spend a long time with each piece—they see something in the artwork, or the concept."

The forms "are very pragmatic," Watt said. "They have to do with…the concerns of people in India 1,200, 1,400, 1,800 years ago." Tara is also thought to protect against eight common fears: lions, snakes, fire, drowning, ghosts, robbers, elephants, and tyrants.