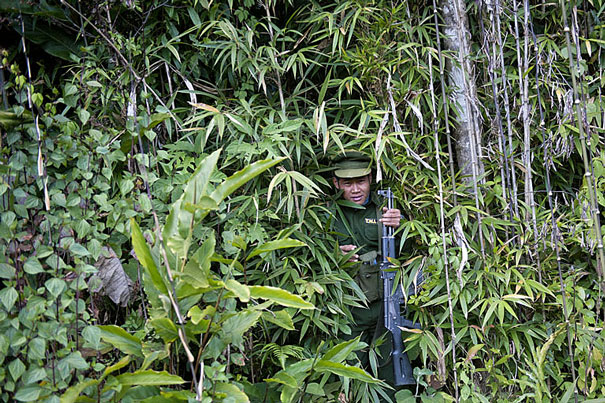 A soldier from the Ta'ang National Liberation Army emerges from a forest in Mantong township in Myanmar's northern Shan state, Jan. 16, 2014.
AFP

An alliance of four ethnic armed groups fighting Myanmar forces in northern Shan and Kachin states said on Tuesday it wants to participate in peace talks with the government next month, but demanded that China and another ethnic militia be present as witnesses, an officer from one of the groups said.

“We believe a cease-fire is not a final solution, and we have a desire to hold talks with the government to get a political solution,” Major Mai Ai Kyaw of the TNLA told RFA’s Myanmar Service.

“We want China and the UWSA [United Wa State Army] to act as witnesses, but we haven’t had any responses so far,” he said. “They need not take part in the talks, but only attend as witnesses.”

The UWSA—Myanmar’s largest nonstate army—is led by ethnic Chinese commanders and controls the Wa Special Region in eastern Myanmar’s Shan state. It has previously received support and weapons from China, though the militia has not been involved in any clashes with government troops in recent years.

UWSA delegates walked out of the first round of peace negotiations in the civilian-led government’s 21st-century Panglong Conference early last September because they had been accredited only as observers and not as speakers.

The Northern Alliance wants China to ensure the talks are just and fair, he said.

He blamed the latest bout of fighting on government army offensives against the ethnic militias and on restrictions paced on some ethnic armed groups who signed a nationwide peace agreement (NCA) in October 2015.

“If, on one hand, it talks about peace and, on the other hand, it carries out offensives on the ground, then peace will be elusive,” he said.

About 10 civilians have died in ground and air strikes during the surge in fighting, according to the Myanmar government, while thousands of others have fled over the border into southwestern China.

The U.N. Office for the Coordination of Humanitarian Affairs estimates that the clashes in Kachin and Shan states have displaced more than 100,000 people.

The news comes as the government gears up for another round of peace talks expected in February in the ongoing Panglong Conference, an initiative spearheaded by State Counselor Aung San Suu Kyi to bring peace and national reconciliation to Myanmar after decades of ethnic separatist civil wars. 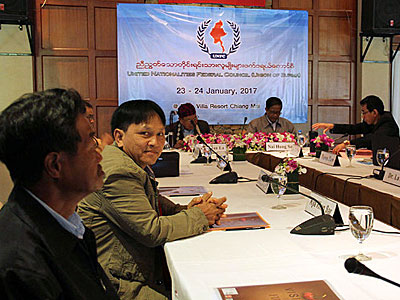 Meanwhile, members of the central executive committee of the United Nationalities Federal Council (UNFC) decided at a meeting on Tuesday in Chiang Mai, Thailand, that ethnic armed groups that did not sign the NCA will not attend the second 21st-century Panglong Conference if they are invited as observers.

The UNFC, an alliance of nine ethnic armed groups that did not sign the NCA, attended the first meeting of the Panglong Conference in order to participate in political dialogue so it can push for the formation of a federal union in Myanmar.

“Our stand has not changed regarding this conference,” said UNFC vice chairman Nai Hantha. “If invited as observers, we will say no. All UNFC member groups must be allowed.”

“We will attend if we are all treated as equals and have freedom to talk about what we want to talk about,” he said. “We want peace.”

Nai Hantha added that the UNFC will wait for the cessation of offensives in ethnic areas so that all nonsignatories to the NCA can participate in the next round of peace talks.

About 35 leaders from seven ethnic armed groups attended the UNFC central executive committee’s two-day meeting, where they decided to continue their discussions with the government about the UNFC’s nine-point proposal for a cease-fire that the group’s Delegation for Political Negotiation and the government’s National Reconciliation and Peace Center are still negotiating.

In a related development, two rights groups—New York-based Human Rights Watch and Southeast Asia-based Fortify Rights—called on Myanmar on Tuesday to immediately release or charge two ethnic Kachin Christian leaders who have been arbitrarily detained by the military since Dec. 24, 2016.

Langjaw Gam Seng, 35, and Dumdaw Nawng Lat, 65, both leaders with the Kachin Baptist Convention (KBC), went missing after being summoned to a military base in Muse township in northern Shan state in apparent retaliation for taking journalists to a Catholic church allegedly damaged by airstrikes in clashes between the government army and ethnic guerillas.

On Jan. 19, the military published a statement on social media acknowledging the men’s arrest and detention and accusing them of providing support to KIA rebels.

However, the military had not filed charges, turned them over to civilian authorities, or provided them access to lawyers or family members, as required by Myanmar and international law, the two rights groups said in separate statements.

“The arrest of the two Kachin Baptist leaders appears to be retaliation for their help in exposing wartime abuses,” said Matthew Smith, chief executive officer of Fortify Rights. “The military came clean about their detention only after local and international outcry, but they [are] still at grave risk.”

Phil Robertson, HRW’s deputy Asia director at Human Rights Watch said: “Government leaders are responsible for the safety and security of these two men and should ensure lawyers and family have immediate access.”

Presidential spokesman Zaw Htay told Democratic Voice of Burma on Tuesday that the military turned the Kachins over to the Muse police station where they were charged under the country’s Unlawful Associations Act.

The government will ensure they receive legal representation, he said.

The Baptist-denominated evangelical organization headquartered in Myitkyina, Kachin state, has been helping internally displaced people who have fled fighting between the government army and ethnic militias in both Kachin and Shan states.