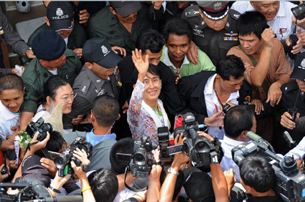 Pro-democracy leader Aung San Suu Kyi Wednesday pledged to better protect the rights of impoverished migrant workers from Burma as she spoke to a crowd of thousands of supporters in central Thailand on her first official trip outside of her homeland in more than 20 years.

The Nobel laureate spoke in Maha Chai, home to Thailand’s largest population of Burmese immigrants, who fled their country for opportunities abroad after years of economic misrule under the former military junta.

But many of Burma’s migrant workers have been exploited, paid low wages, and even trafficked in Thailand, and Suu Kyi, a longtime advocate of migrant rights, offered words of encouragement to the crowd, which responded with exuberant cheers for the recently elected Member of Parliament.

“Our ultimate goal is to create a situation so that our citizens can come back to our country whenever they want to and without any trouble. We have to work together to get to that goal, not separately or in different ways,” she told her supporters.

She called on the workers to train well and to carry out their work “responsibly” in order to gain the respect of their host country.

But she also said that the migrant community needs to be better educated about its rights as workers and to cooperate in protecting those rights “systematically and peacefully.”

“We don't need to feel sorry for ourselves and to be disheartened. History is something that is changing constantly,” she said.

She vowed to use her time in Thailand to determine the best way to protect the rights of Burmese workers, but reminded those in attendance that they had a duty to both their homeland and their host country to conduct themselves respectably.

“I want you to know that you are not forgotten,” she told the crowd.

Later, after meeting with worker representatives, Suu Kyi again addressed the crowd, saying that many of the problems facing Burmese migrants in Thailand stem from a combination of mismanagement by employers, a lack of clear policy by the government, and a worker population ignorant of their rights.

“I want to suggest forming a small community—a place to gather where there is a large amount of migrants working—so that you can find a way to go through the right channels whenever you are mistreated,” she said.

Maha Chai is home to the largest Burmese population per capita in Thailand, which relies heavily on low-cost labor—both legal and trafficked—from its two million foreign workers, of which some 80 percent are from Burma.

Workers who spoke with RFA, most of whom did not have work permits, said that they had been repeatedly targeted by corrupt authorities in the area who solicit payoffs by threatening them with jail or deportation.

"The Thais bully the Burmese and the Thai police are the worst. Since we don't have work permits, they arrest us, and extract money from us for release,” one female migrant worker told RFA, on condition of anonymity.

“If we can't pay after we’re arrested, we are forced to borrow money at high interest rates from someone else,” she said.

Another worker named Khin Swe Oo, who is originally from Moulmein in central Burma, said police would do anything to arrest migrants because they are afforded little protection under Thai laws—even those in possession of the documents required to stay in the country.

“Some criminals take our passports … and extort money from us to get our papers back. These criminals are also police officers. They are the same and act as it suits them,” she said.

“We do the necessary paperwork to obtain a legal residence permit, but the police and the Thais know they can bully us and extort money from us … We are not safe here, even though we have our proper papers and passports.”

And a third female migrant, who also spoke on condition of anonymity, said that she and many of her compatriots simply wanted to return to Burma.

“I just want to go home. Can I get a good job there? We are so repressed at our workplaces, the way they treat us.”

Aung San Suu Kyi arrived in Thailand on Tuesday for a six-day official visit—her first abroad since being released in November 2010 from nearly 15 years of house arrest over the past two decades.

On Saturday, the parliamentarian is expected to travel north near the Thai-Burma border to visit the Mae La refugee camp for those displaced by ethnic fighting in Burma’s borderlands.

Some 150,000 refugees from Burma, mostly ethnic Karen, currently live in camps near the border in Thailand, pushed out by decades of fighting with the Burmese government.

Aung San Suu Kyi has said that ending ethnic conflict would be one of her top priorities in office and has called for a “second Panglong Conference” like the one her father, Burmese independence leader General Aung San, negotiated with ethnic minority groups in 1947.

In nearby Mae Sot, she will meet with leaders from six ethnic groups before returning to Burma on Sunday.

Reported by RFA’s Burmese service. Translated by Khin May Zaw. Written in English by Joshua Lipes.