Firefighters struggle to contain an inferno in Rangoon.
2010-05-24
Tweet 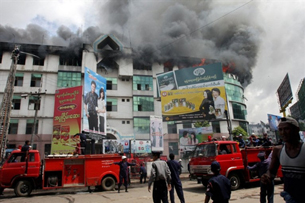 BANGKOK—A massive fire has ravaged a popular wholesale market in Burma’s former capital, Rangoon, and firefighters have been unable to contain the blaze, according to witnesses.

They appeared to have died down around midday, but reignited in the late afternoon and were still burning as of 10 p.m., residents said.

One witness who lives near the market said the fire had spread to the restaurants located on the building’s rooftop.

“Earlier in the afternoon it was restricted to the eastern side [of the building], but now it has moved to the western parts. We could smell plastics burning and lots of toxic fumes,” the resident said.

“The fire engines are bringing in more water and still trying hard to put out the fire. We could hear small explosions and then flames would shoot up,” he said.

The fire started on the top floor of the four-story market in Rangoon’s Mingala Taungnyunt district at about 8:30 a.m., more than an hour before the market opened for business.

The city’s fire department deployed more than 60 engines to fight the flames.

Fire engines from as far away as Pegu—some 50 miles (80 kms) northeast of Rangoon—were directed to the scene to assist.

The number of casualties couldn't immediately be confirmed, but some witnesses said that more than a dozen firemen had been injured in the inferno.

As the fire burned, rumors swirled about the cause of the fire, which had yet to be determined as of late Monday.

While some residents said the flames had been sparked by an electrical short circuit, others suspected foul play.

“There were rumors about a month ago that the market would have to move to somewhere and some thought it could not be an accident,” one witness said.

An early estimate suggested that nearly 600 of the market’s shops and stalls had been destroyed, with damages in the hundreds of millions of kyats (U.S. $1 = 990 kyats at the current black-market exchange rate).

The blaze was the second of its kind this year in Rangoon after another major fire ravaged Thingangyun Market on Feb. 12.

Although no one was killed or injured, more than 600 shops and two residential buildings were destroyed in the fire.

According to a report by The Irrawaddy, several stallholders remain suspicious that previous fires at marketplaces in Rangoon, including the Thingangyun blaze, were set deliberately as authorities sought to confiscate the premises in the interest of building new development projects.

Traders said their suspicions were aroused because the fire had broken out on a holiday when the market was closed and added that the fire department had not done enough to fight the fire.

Rangoon’s municipal committee had previously announced that it wanted to turn Thingangyun Market into a multi-level concrete bazaar, but stallholders objected to the plan and it was never implemented.

Following the fire, an official from the municipal committee's market department confirmed that the site would become government property and traders would be forced to leave.

The city government said there were no plans to compensate shop owners.

None of the shop owners who had lost property in the fire were covered by insurance, according to the state-run Myanmar Insurance Company.