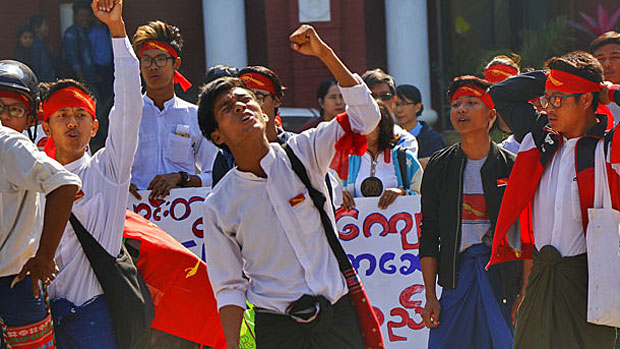 Myanmar students protest in Mandalay for an increase in education funding in a January 2018 photo.
Photo provided by a student

Around 40 students enrolled in universities around Myanmar have been dismissed from their classes after they joined in a protest calling for an increase in the country’s education budget, with some vowing to stay out of school rather than promise not to protest, sources say.

The four-day protest beginning Jan. 22 at central Myanmar’s Mandalay Yadanabon University was broken up by police on Jan. 25, and some 72 protesters were briefly held by authorities before being sent home.

Of that number, around 40 have now been dismissed from their schools, protest leader Ye Myo Swe told RFA’s Myanmar Service on Monday.

“Up to today, about 40 have been suspended,” Ye Myo Swe,  a law student at Yadanabon, told RFA.

“The rector of the Sagaing Education University recently met with four of that school’s students and told them they would have to quit the school if they couldn’t promise not to take part in any more protests,” he said.

“We think all 72 students who were detained will [now] be expelled,” Ye Myo Swe added in remarks to Myanmar’s The Irrawaddy newspaper in a Jan. 29 report.

The Myanmar Teachers’ Federation called on Myanmar’s Ministry of Education on Sunday to readmit the dismissed students, saying that their forced removal from their schools would discourage other students from speaking out on issues of concern to them in the future, The Irrawaddy said.

Students and other dissidents were routinely imprisoned in Myanmar by the military junta that ruled the country for a half-century, with a military-linked civilian government later jailing nearly 60 students and their supporters in March 2015 for demanding education reforms.

Dozens were freed after democracy icon Aung San Suu Kyi’s National League for Democracy took power in April 2016, but concerns persist over violations of the rights to freedom of peaceful assembly and expression in the formerly military-ruled country.