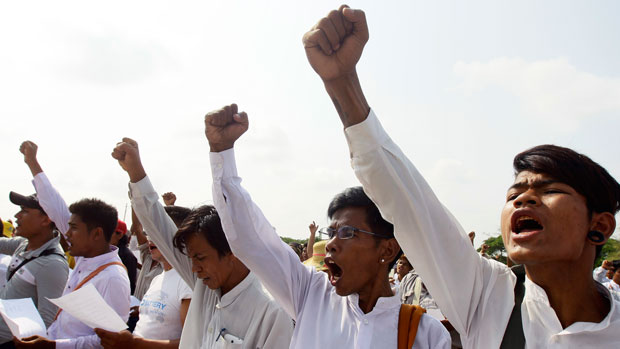 Members of Myanmar's Ma Ba Tha organization shout slogans at a rally in the capital Naypyitaw, May 20, 2017.
AP

Myanmar government officials on Friday denied any role in the banning by Facebook of the accounts of ultranationalist Buddhist monks accused of hate speech directed at the country’s minority Muslim communities, saying they had only requested that the monks’ postings be monitored.

In a statement Friday, Myo Nyunt—spokesperson for Myanmar’s National League for Democracy (NLD)-led government—said that his party was not responsible for Facebook’s actions Thursday shutting down the accounts.

“We cannot answer for Facebook taking action against those who distribute or provoke racial and religious hate speech in Myanmar. We can only explain that we were not a part of that decision,” he said.

“People reported those accounts to Facebook, and Facebook took action against them after verifying their complaints. Our party and our government had nothing to with that,” he said.

According to a statement released on Friday by Myanmar’s Ministry of Information, Information Minister Pe Myint met with a Facebook representative on June 5 and asked that the social-media giant closely monitor its site for hate speech and “vulgar or offensive” writings that could stoke tensions in the country.

Facebook then closed the account of the nationalist Buddhist Ma Ba Tha organization, along with the personal accounts of two extremist monks blamed for inciting hatred toward the Muslim Rohingya, 700,000 of whom fled the country to neighboring Bangladesh following communal clashes and a crackdown last year by the national army.

In a statement, Parmaukkha, one of the monks whose accounts were closed, denied having posted material promoting ethnic hatred, saying he should have been given evidence of any violations before his account was shut down.

“My account could also have been suspended for two months as a warning. I could accept that,” he said, adding, “This kind of thing should not happen while the country is undergoing democratic reforms, as it can only undermine public trust.”

U Thein Than Oo, a human rights lawyer and former political prisoner, meanwhile applauded Facebook’s move, calling it necessary for the “security and tranquility of the country.”

“We need freedom, but we also need to preserve peace and harmony,” he said.

Facebook has been criticized in the past for failing to control hate speech on its platform, and has publicly admitted its failures, he said.

“Now they are trying to tighten the noose on hate speech in Myanmar. And if this is what they want to do, we should welcome it,” he said.