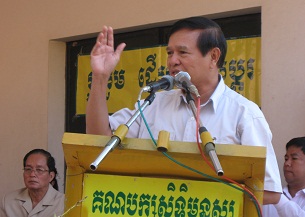 Officials from two key Cambodian opposition parties which have agreed to merge have met for the first time inside the country, laying the groundwork for registering their new joint party.

The meeting at HRP’s headquarters in Phnom Penh was the alliance’s first since the two parties announced in Manila on July 17 that they were joining forces to challenge Prime Minister Hun Sen’s ruling Cambodian People’s Party (CPP) in the July 2013 general election.

Kem Sokha, CDMNR vice-president and HRP president, promised supporters the two parties are working on creating a joint political platform and will publicize it to voters before the merger.

“We are working to create a political [framework] immediately to register the new party [for the upcoming election]. We understand the laws. We won’t let our supporters down,” he said.

He added that the two parties’ commune councilors are working at the grassroots level to prepare for the merger and that representatives from the two parties say they are striving to “legally register” the party without losing their current lawmakers’ seats.

The SRP currently holds 26 seats in the National Assembly while the HRP has three, but officials say they will lose those seats if their current parties are dissolved ahead of the election.

CDMNR and SRP President Sam Rainsy, who lives in exile and faces charges in Cambodia that he says are politically motivated, told the meeting that the two parties will campaign both locally and internationally to press Cambodia’s government to allow for his return in time for the vote.

Addressing the meeting via Skype videoconference from an undisclosed country, he said the new joint party candidate will be a crucial alternative to Hun Sen, who has been the country’s prime minister since 1998.

“There are only two candidates for prime minister, Hun Sen and Sam Rainsy. So without my presence, there would be no election. Just as in boxing, you need two people to box,” he said.

He said they will also campaign to press the government to reform the national election commission.

The two parties had previously criticized the national election commission, saying its members are biased toward the CPP, which has ruled the country for three decades, and which easily won the country’s commune-level elections in 2002, 2007, and 2012 amid political violence and other problems.

On Tuesday, Sam Rainsy and Kem Sokha began a trip to the U.S. and other countries to drum up global support for pressure on the Cambodian government.