The Burmese opposition leader leaves the country for the first time in more than two decades.
2012-05-29
Tweet 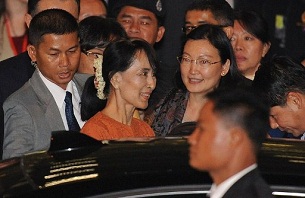 Aung San Suu Kyi leaves the Bangkok airport after arriving in Thailand from Rangoon, May 29, 2012.
AFP

Burma’s opposition leader Aung San Suu Kyi arrived in Thailand on Tuesday on her first foreign trip in 24 years, during which she will attend international economic talks and visit Burmese refugees and migrants.

The pro-democracy icon’s trip to Bangkok, where she will address the World Economic Forum’s meeting on East Asia on Friday, marks a new step in her political career since her release from house arrest in 2010.

The 66-year-old Nobel laureate, who is expected to meet with Thai Prime Minister Yingluck Shinawatra, had spent the majority of the past two decades under house arrest in Rangoon during the rule of Burma’s former military junta.

During the brief periods when she was free, she had refused to travel abroad for fear of being refused reentry to her homeland by the generals who considered her a threat to their grip on power.

But following reforms undertaken since Burma’s new, nominally civilian government came to power last year, Aung San Suu Kyi, who leads the opposition National League for Democracy,  contested and won a seat in parliament in a landmark vote in April.

Thitinan Pongsudhirak, a political analyst at Bangkok’s Chulalongkorn University, said the trip to Thailand, which will be followed by a tour of Europe next month, marks a step in Aung San Suu Kyi’s transition to a more international role.

"This is a huge, symbolic, but also substantive visit because it's going to mark the beginning of Aung San Suu Kyi as an international stateswoman,” he said in an interview with Agence-France Presse.

Burmese President Thein Sein had also been expected to attend the World Economic Forum meeting, which aims to promote stronger ties between the 10 member states of the Association of Southeast Asian Nations, but postponed until next week his official state visit, which would have overlapped with Aung San Suu Kyi’s.

As Aung San Suu Kyi arrived in Bangkok, Burmese migrants in central Thailand’s Maha Chai prepared to welcome her to their city.

U Toe, a workers’ coordinator in Maha Chai, said that posters welcoming Aung San Suu Kyi could be seen in many factories and that some of the city’s 300,000 Burmese were looking to take time off for the occasion.

"We haven’t heard about a day off yet, but workers are saying they will come to meet Aung San Suu Kyi whether or not they have the day off,” U Toe said.

Maha Chai is home to the largest Burmese population per capita in Thailand, which relies heavily on low-cost labor—both legal and trafficked—from its two million foreign workers, of which some 80 percent are from Burma.

U Toe said Aung San Suu Kyi will tour centers for Burmese workers in the country and that her aide had come to Maha Chai to review those sites.

"We showed him where we will be taking her: to the national identity verification office, to the Talakon shrimp market, and to meet with workers at the library founded by the Migrant Workers Rights Network,” he said.

On Saturday, Aung San Suu Kyi is expected to travel north near the Thai-Burma border to visit the Mae La refugee camp for those displaced by ethnic fighting in Burma’s borderlands.

Some 150,000 refugees from Burma, mostly ethnic Karen, currently live in camps near the border in Thailand, pushed out by decades of fighting with the Burmese government.

Aung San Suu Kyi has said that ending ethnic conflict would be one of her top priorities in office and has called for a “second Panglong Conference” like the one her father, Burmese independence leader General Aung San, negotiated with ethnic minority groups in 1947.

In nearby Mae Sot, she will meet with leaders from six ethnic groups before returning to Burma on Sunday.

Later in June, she will begin a European tour, including an address at an International Labor Organization conference in Geneva on June 14.

She will also stop in Oslo to formally accept the Nobel Peace Prize she was awarded in 1991 and travel to the UK where she will address both houses of parliament—an honor bestowed on only a handful of world leaders.

Before leaving for Bangkok, Aung San Suu Kyi met with visiting Indian Prime Minister Manmohan Singh, who invited her to visit his country.

Reported by RFA’s Burmese service. Translated by Khin May Zaw. Written in English by Rachel Vandenbrink.

Aung San Suu Kyi is an amazing lady of Burma and truly democrat heroes. She deserves to be not only the leader of her own party, but desirable to be the president of Burma. She will make a great president and the only president that can unite all Burma people in the 21st century.