Months after widespread Tibetan protests against Chinese rule, hundreds of monks are detained in Qinghai.
2008-08-28
Tweet 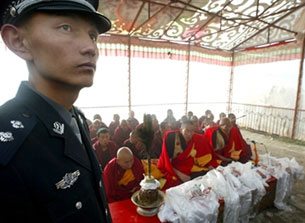 Monks from two major Tibetan Buddhist monasteries, Sera and Drepung, both in the Tibet Autonomous Region (TAR), may have been targeted because they were seen as playing a leading role in the demonstrations, the sources said.

Many came to study at the two monasteries near Lhasa from remote areas in eastern Tibet where the Kham and Amdo dialects are spoken.

A smaller group of monks was removed from another monastery, Ganden, and taken into detention with the others, the sources said, speaking on condition of anonymity.

Unrest erupted in Lhasa on March 14 after four days of peaceful protests, turning into a day of riots targeting Han Chinese residents and businesses. China reacted by sending in a large force of paramilitary People’s Armed Police to quell the unrest, sealing off the TAR and Tibetan-populated regions of China from contact with the outside world.

Exiled Tibetan leaders say 203 people died in the violence that followed, while Beijing says 22 people died, only one of them Tibetan.

According to an authoritative source who spoke on condition of anonymity, 675 Tibetan monks from the three targeted monasteries were put on a train from Lhasa on April 25.

“Among those 675 monks, 405 were from Drepung, 205 were from Sera, and eight were from Ganden,” the source said. The remaining 57 monks from outlying areas were said to have been taken from smaller Lhasa monasteries.

“They were transported to a military detention center in Golmud” in the Haixi [in Tibetan, Tsonub] Mongol and Tibetan Autonomous Prefecture in Qinghai, the source said.

“All the monks who came originally from the Qinghai region were [then] deported to their respective towns. They are still detained there in their hometown prisons or detention centers.”

They were escorted home from Golmud by officials from the Qinghai United Front and Religious Affairs Bureau, according to the source.

Monks who came originally from monasteries in the still-troubled region of Kham in Sichuan province are still being held in Golmud, however, the source said. The number of those still in detention cannot be independently confirmed.

The monks were rounded up in three groups, the source said.

“On April 10 in the afternoon, security forces detained 550 monks from Drepung monastery, took them to the Nyethang Military School, and detained them on the school campus.”

“Then, on the night of April 14, a huge contingent of Chinese security forces arrived at Sera monastery and took away about 400 monks and detained them at a military prison in Tsal Gungthang,” about 20 kms (12 miles) east of Lhasa, the source said.

“On April 17, a group of monks from Ganden was also rounded up and detained somewhere in Lhasa,” the source added.

All those detained were reported to have suffered harsh treatment, including beatings, while in prison.

“Twenty-four monks from Drepung and Sera monasteries remain in detention at the Nationalities Middle School in the Marpa subdivision of Rebgong in Qinghai province, where they have been held since July 25” after being moved from Lhasa in April, the source said.

Held in a house

Another source with contacts in the region said that a small group of monks from monasteries in Sogpo county in the Malho [in Chinese, Huangnan] Tibetan Autonomous Prefecture of Qinghai had been studying in Lhasa monasteries at the time of the unrest.

“Recently, they were found detained in a house close to the Sogpo county center,” he said. “They had not been put into prisons but were under some kind of house arrest. Later, we learned that they had been taken into detention in Golmud in April.”

“They are not allowed to leave, but their family members and relatives can see them at the house where they are being held.”

“There were about 30 to 40 monks studying in Lhasa who had come from different monasteries in Gepasumdo [in Chinese, Tongde] county” in the Tsolho [in Chinese, Hainan] Tibetan Autonomous Prefecture in Qinghai, the source said.

“There were 20 monks from Tsang monastery alone who were studying at Sera. We were told that all of them were detained.”

A Tibetan woman living in Rebgong [in Chinese, Tongren] county in the Malho Prefecture said she had learned that her brother, a monk studying in Lhasa, had been taken to the Golmud City Detention Center.

“As you know, he was from Kirti monastery in Aba [in Tibetan, Ngaba] Prefecture [in Sichuan], but was at Sera monastery in Lhasa at the time of the March protests,” she said. “We couldn’t trace him for a long time.”

These monasteries “have colleges that are specifically designed, and have been for centuries, to accommodate people from those areas,” he added. Efforts beginning in 1994 to stop this practice have largely proven unsuccessful, Barnett said.

Barnett cited reports that the Lhasa protests that began March 10 comprised monks from the Amdo Tibetan area in Qinghai province.

“I don’t know how strong the evidence is for that.”

Officials at the Huangnan Prefecture Public Security Bureau denied knowledge of any monks being held at the Nationalities Middle School in Rebgong.