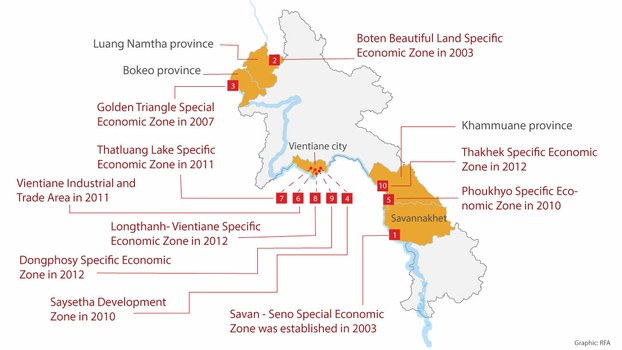 A map details the 10 special economic zones Laos has established since 2003.

The Lao government must grant land leases based on type of investment, according to a former official, who said a recently amended law that limits leases to 50 years would do little to curb the ill effects of gambling at concessions where casinos are located.

A former official who previously worked at the Savan-Seno Special Economic Zone (SEZ) in Savannakhet province told RFA’s Lao Service that 50-year leases are “too long” for concessions with casinos, where the benefits of job creation are undermined by gambling addiction in local communities.

“The length of the concession should depend on what investments are part of the SEZ,” said the official, speaking on condition of anonymity.

“If the SEZ includes many factories that provide local employment, it is acceptable to give an investor a 99-year concession, but if gambling venues or casinos are established in the SEZ, even a 50-year concession is too long and makes the investment not worthwhile.”

In November 2016, the National Assembly approved an amendment to the law on investment promotion, capping concession leases at 50 years. The amendment went into effect in December.

Under the previous version of the law on investment promotion, implemented in 2009, investors could be granted land concessions for up to 99 years after receiving approval from the National Committee for Special Economic Zones. Prior to that, investors sought approval directly from the country’s deputy prime minister.

The government has not provided an official statement on why law on investment promotion was amended last year, though officials have occasionally hinted that regulations on concessions could be improved.

According to the Ministry of Planning and Investment, Laos has established 10 economic zones since 2003, seeking domestic and international investors through tax and duty incentives as part of a bid to promote infrastructure development, employment and production in the regions they are located.

At least two of the economic zones—the Boten Beautiful Land Specific Economic Zone launched in 2003 in Luang Namtha province and the Golden Triangle SEZ opened in 2007 in Bokeo province near the Lao borders with Myanmar, Thailand, and China—include casinos within the zones.

At least two others—the Dongphosy Specific Economic Zone formed in 2012 in Vientiane and the Savan-Seno SEZ set up in 2003—have established casinos alongside the zones.

The former official told RFA that while economic zones with factories, such as Savan-Seno, bring employment opportunities to hundreds of area residents, those featuring casinos do more damage than good to local communities, and suggested the lease cap would do little to limit that.

“People regularly get involved in gambling and lose their money, so they become bankrupted because after they develop an addiction, they sell away all of their property,” he said.

“In principle, Lao people are prohibited from gambling in casinos, but in actuality, the players are mostly Lao.”

Attempts to contact Bouatha Khattiya, vice chairwoman of the National Committee for Special Economic Zones, about the effect of casinos on Lao communities went unanswered. 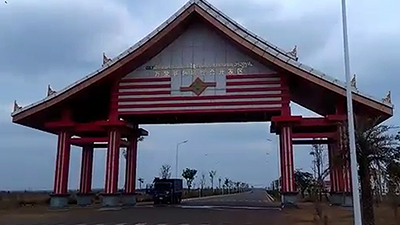 Laos, one of the least developed Southeast Asian states, has become the subject of massive foreign investment, especially from companies from China, Thailand, and Vietnam.

Much of Laos’s economic growth has come from land concessions for natural resources—including timber, agricultural products, minerals, and energy—but some worry that it comes at a cost for those who lose their land.

Speaking at the National Assembly on Wednesday, Prime Minister Thongloun Sisoulith hinted that the government is continuing to refine concession policy in Laos.

“There are loopholes in implementing the policy [on concessions] as well the land law, causing problems,” he said, without providing details.

“The government recognizes that they are urgent issues to be addressed and has begun the process of correcting them.”

Lao government is not in any way interested in fighting corruption. Corruption feeds them and China is giving more to Lao leaders that's how they got the business. The country is being eaten up by China. As far as Mr Sombath is concerned I'm afraid he'd never come back. I hope I'm wrong.

I feel there is no SEA country that barely gives some care to economy like in Laos. Though the government is interested at fighting corruption, so far it worked only very slowly. And please bring Sombath back.