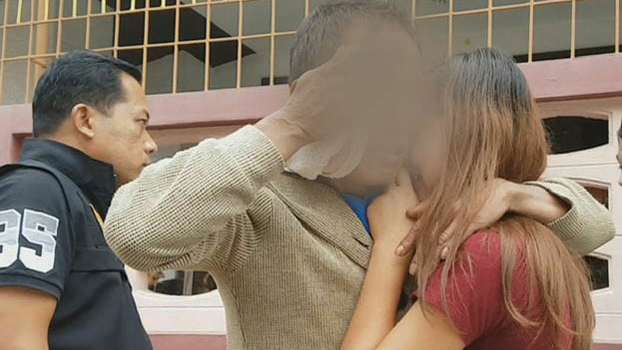 A Lao man embraces his daughter after she was rescued from what authorities believe was a human trafficking ring, Jan. 7, 2017.
Photo courtesy of an RFA listener

The family of a 25-year-old Lao woman who married a Chinese man 30 years her senior has recently reestablished contact with her after not hearing from her in about a year.

Fearing that the woman, identified with the pseudonym Lah, had passed away, her family shared her story on Facebook about two weeks ago in a desperate attempt to find her.

Lah had not been allowed by her husband to visit her home in Hatgood village, Ad district, Houaphanh province since her marriage began three years ago.

“We posted her story on Facebook asking her friends to look for her,” Lah’s sister told RFA’s Lao Service on Thursday.

“One week later, [Lah’s] husband allowed her to contact the family,” she said.

According to her sister, Lah’s husband took her to live in China after giving her parents a 20 million kip (about $2260) dowry, and she was not allowed to return for a visit since.

The family has already formulated a plan to attempt to bring Lah return home.

“The family will ask the Lao consulate in China for assistance in finding her if we go more than a month with no contact,” said Lah’s sister.

“My parents have never even met [their supposed] son-in-law,” she said.

RFA contacted an official from Houaphanh province’s anti-trafficking division Thursday who said they would be willing to help the family bring Lah home.

“If her family knows [any] information about her [such as] her address, please inform us so we can coordinate with Chinese authorities to bring her home.”

While it is uncertain if Lah is a victim of human trafficking, Lao women and girls are frequently trafficked into China through brokers promising jobs or marriage.

As many as 3,000 Lao women and girls have been trafficked to China, with about 600 rescued during the last decade, according to a Lao official who spoke at an anti-trafficking conference in the Lao capital Vientiane in March.

In many cases these women and girls were forced to work in brothels or forced to marry older Chinese men.

In September a 16-year old girl from Oudomxay province was rescued from a brothel in China by anti-human trafficking police.

She had been tricked by a Lao broker into believing she was going to China to study, but she was sold to the brothel, where she was forced to have sex with multiple men daily over a period of eight months.

Following her rescue and repatriation, a village leader told RFA, “she was physically assaulted and forced to have sex with many men,” adding that she was undergoing rehabilitation in a shelter and would be sent home when her health returned.

In August, 30-year-old woman, also from Oudomxay was rescued after having spent 20 years in China since the age of 10, first in a forced marriage and then subsequently sold to a brothel.

An official of the Oudomxay Women’s Union told RFA that after two decades of abuse, the woman was now considered mentally ill.

“She did not actually ask the police for help. She had been involved in drugs, so Chinese police locked her up and then sent her home,” the official said.

In July, two girls, aged 14 and 15, also from Oudomxay, were sent home after being rescued by police from their forced marriages.

They had been promised jobs with a high salary, but had been sold as wives to Chinese men and were unable to escape for four months.

The U.S. State Department placed Laos on the Tier 2 Watch List in its 2019 “Trafficking in Persons Report” for not fully meeting minimum standards for the elimination of trafficking, though the report noted the country was making significant efforts to do so.

Laos was upgraded from its Tier 3 ranking last year for providing restitution to some trafficking victims through the criminal justice process, directly providing services to trafficking victims, issuing a decree to form anti-trafficking steering committees at the provincial and local levels, and conducting increased training and awareness-raising at the local level to help implement the decree, the report said.

The annual report ranks countries around the world as Tier 1, Tier 2, Tier 2 Watch List, or Tier 3, in descending order based on whether they meet the minimum standards to combat trafficking set by U.S. law.

Reported by RFA's Lao Service and translated by Ounkeo Souksavanh. Written in English by Eugene Whong.