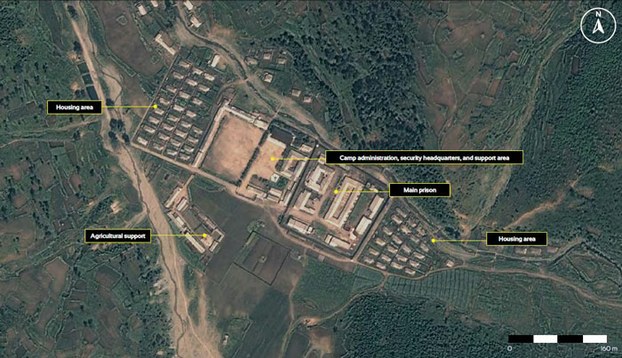 The North Korean government appears to have enlarged one of its notorious prison labor camps so that it can handle an influx of female prisoners and expand its economic operations, according to a newly-released report by the Committee for Human Rights in Korea (HRNK).

Using global imaging technology to peer into North Korea as well as eye-witness accounts, the report details how the Kyo-hwa-so No. 12 re-education prison labor camp was enlarged to accommodate female prisoners in 2009.

The U.S.-based HRNK believes the expansion was needed in order to house a large number of female North Korean nationals who were forcibly repatriated from China.

“Their detention highlights the illegality of China’s forcible repatriation of North Korean refugees to conditions of danger, despite overwhelming and justified fear of persecution, in direct violation of the 1951 UN Convention relating to the Status of Refugees, to which China is a party,” said HRNK Executive Director Greg Scarlatoiu.

Estimates of the prison population of Kyo-hwa-so No. 12 have ranged from 1,300 in the late 1990s to about 5,000 in recent years. Some 20 percent of the inmates are thought to be women, with 80 percent of those being females who were repatriated from China.

In 2014 a United Nations Commission of Inquiry found that North Korean authorities “subject those who were forcibly repatriated from China or were caught in the process of trying to reach China to torture, inhumane treatment and imprisonment.”

While the prison, a part of what has been called North Korea’s gulag, appears to have been enlarged to accommodate female inmates, the nature of the work prisoners are forced to do also appears to have changed.

Kyo-hwa-so No. 12 was established between 1980 and 1983 in an area known for agriculture, but a nearby copper mine seems to have emerged in importance.

“The importance of prison labor at the adjacent copper mine, confirmed by satellite imagery analysis, continues to focus attention on the tainted supply chain of North Korea’s extractive industry,” Scarlatoiu said.

Although the prison appears to have gotten bigger, it has also become more crowded, according to Joseph Bermudez, AllSource Analysis co-founder and chief analytics officer. AllSource, a global provider of high-resolution earth imagery, works with HRNK to monitor the North Korean prison camps.

“If the more recent figures are even close to accurate, then Kyo-hwa-so No. 12 is an overcrowded detention facility, judging by international standards,” said Bermudez, a widely published analyst of North Korean military affairs.