Friends say the Korean-American who walked into North Korea was a committed Christian activist.
2009-12-26
Tweet 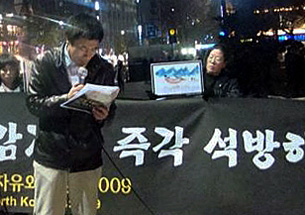 SEOUL—The Korean-American missionary who entered North Korea with a letter to leader Kim Jong Il to call for political change in the Stalinist state is a single-minded, committed Christian who has worked with ailing and impoverished people in Mexico, a friend said Saturday.

He was heading for Hweryong city in North Korea's North Hamgyong province, accompanied by two North Korean defectors who left Seoul with him as his guides.

"I am an American citizen. I am bringing God's love. God loves and blesses you," he shouted as he crossed the border, according to witnesses quoted by the Associated Press, and then disappeared from sight.

They also said he was carrying a letter urging North Korean leader Kim Jong Il to release political prisoners and close the prison system of concentration camps where they are held, they said.

Robert Park on on December 9th in Seoul, South Korea. Yonhap
Park, whose Korean name is Park Dong Hoon, is affiliated with Pax Koreana, a conservative Seoul-based group that calls for North Korea to improve its human rights record.

"Please open your borders so that we may bring food, provisions, medicine, necessities, and assistance to those who are struggling to survive," said the letter, according to a copy posted on Pax Koreana's Web site.

"Please close down all concentration camps and release all political prisoners today." 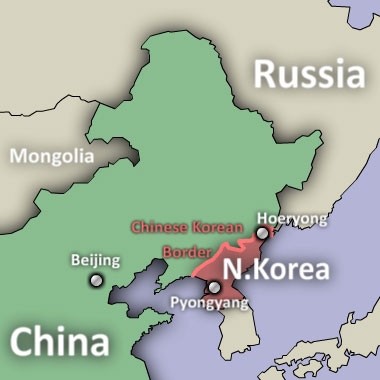 The second letter was addressed to the leaders of South Korea, China, the United States, Japan, and the United Nations.

Park, who friends said experienced unspecified "difficulties" as a youth and never finished college, is a missionary from Tucson, Arizona—so committed that fellow missionaries refer to him as a "prayer warrior."

One friend, who asked not to be named, said he has witnessed Park caring several years ago for a severely handicapped man in Tucson, on whom other missionaries and aid workers had given up.

Park was previously active as a missionary in Tucson, Arizona, in the southwestern United States, where his parents live.

A Korean-American acquaintance said Park sent him an e-mail stating his intentions about a month ago, but the acquaintance tried to dissuade him.

"He knew he would get media coverage and bring attention to the issues he cared about," the person said.

Park, a self-proclaimed seer and activist, is a leader of an international campaign for North Korean human rights called "Freedom and Life For All North Koreans: 2009," his colleague said.

The group describes itself as a worldwide coalition of Christian ministries and activists working to promote human rights in the North.
Whether Park was in North Korean custody wasn't immediately clear, but illegal entry into the country is punishable by up to three years in prison.

Pyongyang held two U.S. journalists for five months this year before freeing them during a visit by former President Bill Clinton.

A close friend who knew Park in Tucson from about 2005 described him as a "fanatical Christian...The most single-minded man any of us knew."

"He is very intelligent. In a younger life he had personal troubles but he came out of these," said the friend, who asked not to be named.

Park was "a pioneer" who organized assistance for the poor in the hardscrabble Mexican border town of Nogales and recruited "numerous" people in Tucson to paticipate.

According to "Freedom and Life for All North Koreans," Park's letter urged that "the borders of North Korea be opened to allow the bringing in of goods necessary to help those in need, food, medicine and daily necessities needed to rescue the dying people of North Korea, that political prisoner camps be closed, and those detained be released, that the leadership of North Korea assume responsibility for starving the people of North Korea and for the deaths occurred in the camps, and that it subsequently step down."

Good job bro. I remember seeing your love for others first hand. Our prayers are for your mission to share Jesus's love, and for your well-being which you've so lovingly given up

God works nuttier. Monk and Priests prayed their lives and still could not CLEARED their sins and here a guy prayed in the public for money wanted try to save the world. I am sure the North Korean they wanted peace and respects too!