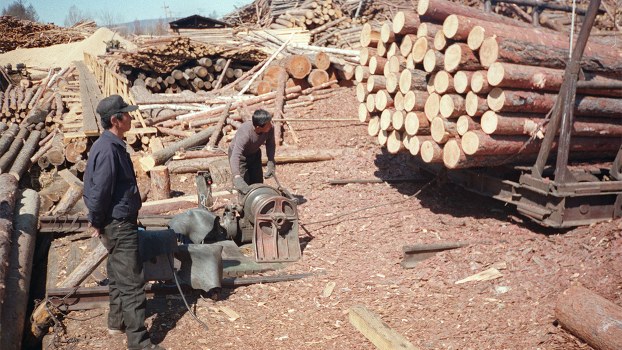 North Korean workers work at a saw-mill in the camp of Dzhalingra in the Russian Far East in a file photo.

The sanctions, aimed at depriving Pyongyang of cash to fund its prohibited nuclear weapons and missile programs, call for a freeze on new working visas for North Koreans and the complete repatriation of North Koreans currently working abroad by the end of 2019.

With the deadline only one year away, Russia has begun to deport North Korean workers, sources say.

A taxi driver in Vladivostok told RFA’s Korean Service on Nov 21, “We [once] had a large number of North Korean workers but you don’t see many these days.”

An employee of a local travel agency confirmed the apparent drop in numbers.

“A Russian friend of mine manages a construction site. I asked him why it takes so long to finish construction projects and he said all the North Korean [workers] have left,” the travel agent said.

“There is an international [passenger] terminal, and ships have come to pick up North Korean [workers] a number of times,” the agent added.

A North Korean worker said that the Russian government is cracking down on North Koreans and kicking them out of the country.

“[The government] has ordered that we are to be removed and [for companies] to not give us jobs,” the worker said.

“The international community was trying to figure out how North Korea is getting money to make nuclear weapons, and they found that there are many North Korean workers in Russia, so that’s why we’re being kicked out.” the worker added.

'They must be tourists'

Some North Koreans remain, even though their presence may fall into a legal gray area.

“They must be tourists,” a Russian businessman who formerly hired North Korean workers said, adding, “What I mean is that they entered the country on a travel visa. [If they are working,] It’s illegal.”

“If they get caught they will be deported,” he said.

One North Korean worker in such circumstances, identified by his surname Park said, “Russia does not allow us to reside [in the country,] so I came in with a travel visa.”

Park’s travel visa is valid for only three months. He currently works for a local construction company, installing tiles over plaster.

Park said he had been working in several Russian cities for about three years before returning to North Korea. He then came back to Russia for work this year.

“I was not able to return home for three years. [This time] I can’t go back before making enough money,” he said.

“I plan to make lots of money but my government takes its cut, and I have to eat, so there’s not much left from what I’ve earned,” Park explained.

Other workers have it worse, he said.

“People who work as a group make only about $100 per month. If they buy cigarettes or a pair of socks, they’ll have nothing left,” he said.

Park’s biggest complaint was that the questionable legality of working in Russia leaves him vulnerable, and that North Korean middlemen are taking advantage of him.

Yet with all the hardships Park faces in Russia, he still feels he is more free than his countrymen who he left behind in North Korea.

“It’s really difficult to make a living in North Korea,” Park said, adding, “We don’t have freedom. We live in captivity there.”

Park, who speaks both English and Russian was envious of his brethren in the South.

“South Koreans can go anywhere they want, How nice is that?” he said.