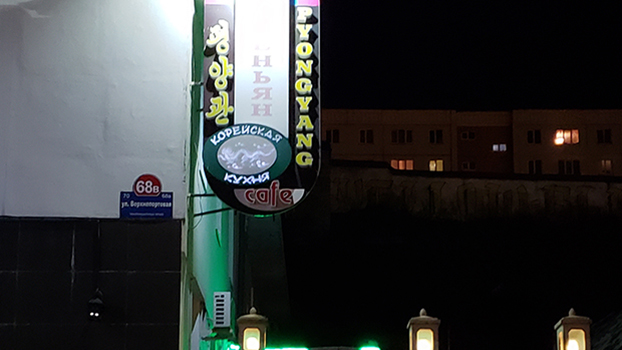 The Pyongyang Café, one of several North Korean restaurants in Vladivostok, in a file photo dated November 2018.
RFA PHOTO/Sangmin Lee

Once popular destinations for dining and entertainment, North Korean-themed restaurants in Russia are now facing difficulty due to labor shortages, sources say.

When the North Korean restaurant boom was in full swing, the major draw was female entertainers from the North who doubled as waitresses, but Russia is now moving to comply with U.N. sanctions on North Korea.

The sanctions, aimed at depriving Pyongyang of $500 million per year that could be funneled into North Korea’s nuclear program, are making it harder for North Koreans to obtain or renew visas to live and work in Russia, as compliance has meant a freeze on the issuance of new visas and the return of North Korean workers by the end of 2019.

Hardest hit are those sectors relying on cheap North Korean labor, such as construction. But the sanctions have also made it difficult for restaurants to hire North Korean female staff.

A local businessman told RFA’s Korean Service that the Keum Gang San restaurant in Vladivostok now has fewer female staff than it did during its glory days.

“There used to be six female servers here,” he said. “Now there are only two.”

“They came here with a work visa, but when it expires they will need to have it renewed,” the businessman said, adding, “[the Russian government] does not allow renewal, so they can’t stay here anymore.”

Musical performances by the female staff were once quite commonplace during the boom, and even casual diners could expect to see live music.

“Now you need to make a reservation two days in advance to see a performance,” a waitress at Keum Gang San said.

The waitress said she and three other kitchen workers came from Pyongyang, and frequently watch North Korean TV on a television installed on the wall behind the restaurant’s small stage. This is the only information outlet that they are allowed.

The waitress explained she has no smartphone and no means of accessing the internet. She also revealed she works very long hours.

“I work from noon to midnight,” the waitress said. “I’m okay, though. It has become kind of a habit.”

“[I work] from Monday through Sunday, and I also perform,” she said.

The waitress said she has no concrete plans to return to Pyongyang, but that she does want to go home.

“Living here is not very convenient,” she said, adding, “I prefer Pyongyang. It’s so hard to communicate with people here, but language isn’t a problem in Pyongyang, and people help each other.”

Some North Korean restaurants hit by the labor shortage are now hiring Russian staff to cope.

A Russian waitress at Vladivostok’s Pyongyang Café said she has been working there for a year.

A North Korean waitress at the same restaurant, who has been working in Russia for two years and three months said performances at Pyongyang Café have now stopped.

“We used to do that, but not anymore,” she said. “We don’t have enough female staff,”