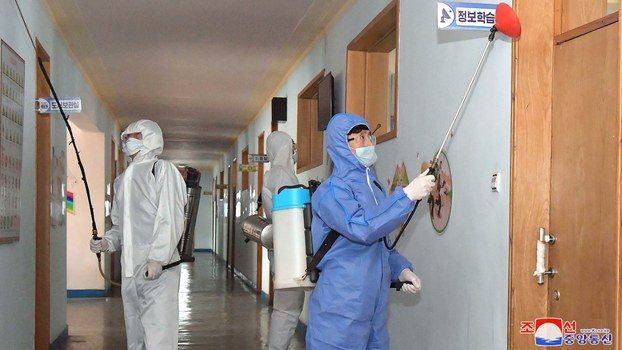 Authorities in North Korea have initiated nationwide school sanitation projects to prevent the spread of the novel coronavirus, but rather than properly fund the projects, the state is making the parents foot the bill.

The projects, which will cost families 30,000 North Korean won (U.S. $3.75) per student, come at a time when families are enduring skyrocketing food prices and are having trouble making ends meet. The average monthly salary supplied by the communist government amounts to less than $5.00.

North Korea has yet to officially report a single confirmed case of COVID-19, but state media last weekend acknowledged it was monitoring around 7,000 suspected cases of the disease.

With the government taking precautions like cancelling major sports events and sealing off entire counties near the Chinese border, its latest initiative is meant to protect the people by keeping the virus out of the schools.

“Sanitation projects are under way in schools of all levels as the Central Committee [of the Korean Workers’ Party] has ordered they take special measures to prevent coronavirus infection,” a resident of North Hamgyong province told RFA’s Korean Service Monday.

“With the coronavirus situation worsening, the Central Committee on Feb. 27 ordered kindergartens and schools across the country to extend their vacation for a month,” the source said.

“At the same time, all the schools received instructions on sanitizing school buildings. Under the pretext of school maintenance, each school is demanding students pay money [for this],” the source said.

“In Chongjin, each student has been ordered to pay over 30,000 North Korean won, which they say is for not just the sanitization project, but also ‘maintenance.’”

According to the source, the maintenance designation for the project is false.

“They say that in addition to sanitizing, they will use the money to replace desks, paint window frames and doors, and repair corridors and walls, but there is no sign that the schools are being repaired and there is no way to confirm how the collected money was actually used,”  the source said.

The source said that in years past funds for school projects like this were paid voluntarily.

“But these days they force the parents to pay. Forcing people to pay for coronavirus sanitation projects when they are struggling to make ends meet is making them angry.”

A North Hamgyong provincial official confirmed to RFA Monday that the sanitation projects were happening but also said that the funds were being used for maintenance in some schools.

“Raksan middle school in Chongjin’s Chongam district has not been able to replace desks for the past 10 years. So [the schools] are taking this opportunity to change desks and refurbish schools along with sanitizing the school,” said the official.

The official also said that the costs of the project can be paid using alternatives to cash.

“They are demanding each student give five kilograms (11 pounds) of rice or 12 kilograms (26 pounds) of corn,” said the official.

The official said that rural parents are feeling the pinch more than residents of Chongjin.

“The schools in the rural areas have less money, so what they are demanding are excessive levies from the parents,” the official said.

“The rural schools are the object of resentment from local farmers,” the official added.

According to the official, the Central Committee wantonly issues orders for nationwide projects but seldom provides funding.

“These days, the food prices in local markets have skyrocketed because of the coronavirus. People are struggling to make ends meet and they resent the authorities for dumping the costs of school sanitization on them.”