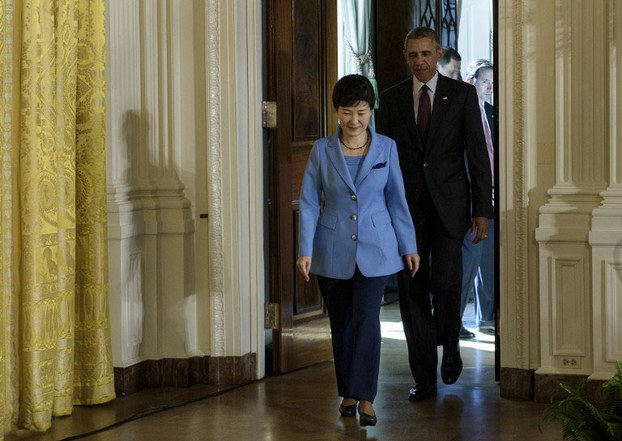 Analysts said the president's endorsement Thursday of  North Korea Sanctions and Policy Enhancement Act, which was approved in recent votes by the Senate by 96-0 and the House by 406-2, will expand U.S. unilateral curbs on Pyongyang's financial activities while intensify the focus on China's dealings with its neighbor and historic Cold War ally North Korea.

The expanded sanctions aim to cut off North Korea's access to the money it needs to advance its nuclear warhead and long-range missile development. The legislation also authorizes $50 million over five years for radio broadcasts into North Korea and humanitarian assistance programs.

North Korea is already the target of a series of sanctions dating back 2006, when it conducted the first of its four nuclear tests, but leader Kim Jong Un and his  isolated country have still found the resources to fund its quest to improve and miniaturize the weapons and advance the rockets needed to deliver an atomic payload.

"We can't stand by while the North Korean regime develops a nuclear arsenal capable of striking the United States," California Republican Rep. Ed Royce (R-CA), chairman of the House Foreign Affairs Committee, said in a statement after Obama signed the bill.

Royce, one of the co-authors of the legislation, added : "Targeted sanctions aimed at banks and companies that do business with Kim Jong Un will cut-off the cash he needs to sustain his illicit weapons programs, his army, and the continued repression of the North Korean people."

Professor Sung-Yoon Lee of Tufts’ University’s Fletcher School of Law and Diplomacy, who advised lawmakers who wrote the bill,  said the measures bring U.S. sanctions against North Korea to the level of its sanctions against Iran, Syria, and other sanctioned states.

"Most rational profit-seeking banks and corporations will choose the latter, thus, rendering North Korea more isolated than ever.," Lee added.

Much of the onus of the new sanctions is likely to fall on China, whose banks, trading firms and ports are North Korea's main lifeline to the outside world.

"The trade relation that North Korea has with China is very significant to the country's national economy and to its internal stability," said Yun Sun, an expert on Chinese foreign policy at the East Asia Program of the Stimson Center in Washington.

"The problem is if the U.S. wants to put unilateral sanctions on North Korea, it will have significant damage to China's natural interest," she told RFA's Korean Service.

Washington and Beijing are at odds at the U.N. in New York over the drafting of new multilateral sanctions against North Korea and "signs of competition and potential conflict are rising" as the two powers dispute maritime issues in the South China Sea, cyber security and human rights, added Sun.