Interview: China’s 'Sanctions Non-enforcement Is Too Extensive to Be Mere Negligence' 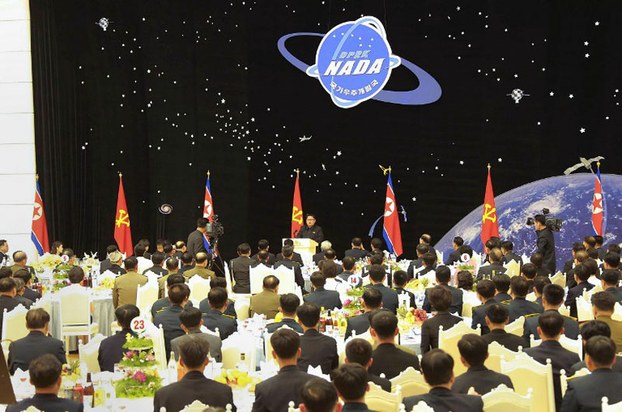 North Korean state media photo of Kim Jong-Un (C) giving a speech during a party for scientists who contributed to the launch of a satellite thought to be cover for a long-range missile, Feb. 13, 2016.

The U.S. House of Representatives overwhelmingly passed an unprecedented tough North Korea sanctions bill on Feb. 12, two days after a 96-0 vote of approval in the Senate.  Most of the bill’s new sanctions, which become effective as soon as President Barack Obama signs them into law, are mandatory, forcing the president to freeze the assets and impose travel bans on anyone engaging in trade or financial transactions that support Pyongyang’s nuclear, weapons, precious metals and raw materials industries, human rights abuses, and cyber threats. In an interview with RFA Korean Service reporter Changsop Pyon, Professor Sung-Yoon Lee of Tufts’ University’s Fletcher School of Law and Diplomacy argues that the bill brings U.S. sanctions against North Korea finally to the level of its sanctions against Iran, Syria, and other sanctioned states. Lee and Joshua Stanton, a North Korean human rights advocate and a lawyer based in D.C., have played an active role in discussions of the North Korea sanctions bill since March 2013, testifying in a House Foreign Affairs Committee hearing on the subject, advising Congressman Ed Royce, Chairman of the Committee, and Senator Bob Corker, Chairman of the Senate Foreign Relations Committee, as well as making a strong case for it on major US media outlets.

RFA: The current bill is regarded as containing the strongest and most comprehensive sanctions on North Korea.  Can you tell me why, and in what respect?

Lee: Contrary to the widespread perception that U.S. sanctions against North Korea are maxed out, they are relatively weak.  Washington has frozen the assets of most of the top officials of the governments of Belarus and Zimbabwe for undermining democratic processes and institutions, but very few high-ranking North Korean officials overall, and none to date for political repression. The U.S. has designated government officials in Syria, Sudan, and Burundi for human rights abuses, but no North Korean officials.  It has threatened and blocked the access of Iran and Burma to the financial system by declaring them to be Primary Money Laundering Concerns under the Patriot Act, but it has not applied this designation to North Korea, the world’s leading currency counterfeiter and money launderer.  Even after North Korea’s terrorist threats against American civilians drove a film that parodied Kim Jong Un from theaters across the U.S. in late 2014, the Obama Administration did not return North Korea to the list of state sponsors of terrorism, a move that would have closed important loopholes in current U.S. sanctions.  The new bill that’s now on President Obama’s desk addresses all these shortcomings and much more.  It requires that the U.S. government make a good-faith effort to investigate and punish North Korean perpetrators of nuclear and other WMD proliferation, transfer of luxury goods, cyber crimes, censorship, and human rights violations and their third-country enablers pursuant to “mandatory sanctions” provisions.  In short, the new legislation reinforces U.S. sanctions against North Korea to the level of U.S. sanctions again Iran and several other countries; that is, to a “normal” degree.

RFA: Can you explain the significance of this bill, compared with similar bills in the past?

Lee: This bill is entirely different: It addresses North Korea’s various illicit activities as stated above and makes it incumbent on the U.S. government to do all that it can do sanction these activities. It imposes secondary sanctions on North Korea’s partners, thus presenting them with a strong economic disincentive: Either continue to do business with North Korea and be blocked out of the U.S. financial system or stop all business with North Korea and continue to have access to the U.S. financial system. Most rational profit-seeking banks and corporations will choose the latter, thus, rendering North Korea more isolated than ever. Furthermore, there are provisions that require the U.S. to continue to enforce these measures until North Korea verifiably denuclearizes instead of prematurely lifting sanctions for the sake of political expediency, as we saw in the case of the Bush administration in 2007 and 2008.

RFA: One of the toughest clauses in this bill is the so-called ‘secondary boycott clause’, designed to target those entities and personals in third country dealings with N. Korea. Do you believe this clause has been intentionally included in the bill to target China?

Lee: Yes.  A recent GAO report shows that many countries have failed to file reports on their compliance with North Korea sanctions resolutions. Other nations, particularly in Europe, continue to provide North Korea with banking services and provide it with luxury goods, in violation of U.N. sanctions.  But China is in a category of one when it comes to violations. China’s practice of sanctions non-enforcement is too extensive to be mere negligence.  In fact, it’s duplicitous. That’s why Chinese banks and businesses must understand that they will face legal consequences for future violations.  China lets North Korea smuggle arms through its ports and its skies, launder the proceeds through its banks, and use those proceeds to buy luxuries for its elites while most North Koreans exist at the verge of starvation. But others are guilty, too. Russia has also played an unhelpful role, and some European states have also failed to enforce the sanctions rigorously.

RFA: I hear that when the US imposed sanctions with secondary boycott clauses against Iran for its nuclear development, China created several special banks to avoid secondary clauses and as a result, its entities and personals involved in dealing with Iran were not hit hard financially. If that's true, don't you think China can do the same when the current sanctions bill becomes effective?

Lee: Chinese banks have also responded positively to the risk of secondary sanctions.  When Treasury froze the assets of North Korea’s Foreign Trade Bank in 2013, several weeks after Pyongyang’s nuclear test on Feb 12, China’s four largest banks—Bank of China, Industrial and Commercial Bank of China, China Construction Bank, and Agricultural Bank of China—all ceased money transfers to North Korea.  International banks are by nature conservative and risk-averse. Small banks like Dandong Bank may continue to transfer money with North Korea, but the big financial institutions will catch on. Unless China and North Korea turn completely to using the Chinese currency, these new measures will mostly likely have their intended effect.  What’s more, Chinese buyers and banks had a greater economic incentive to trade with Iranian entities than with North Korea. Even if the U.S. can only block a portion, a few streams of North Korea’s revenue, the psychological and financial impact on the Kim regime will be significant, and they will only grow with time.

RFA: As you know, the UN Security Council is struggling to come up with additional sanctions on North Korea, mainly because the U.S. and China are split on the details. In that respect, the U.S. doesn't have to care about the UN's foot-dragging and act on its own, right?

Lee: The U.S. will enforce biting sanctions on its own now. But an international coalition is key to a successful sanctions regime. What North Korea sanctions have lacked is an enforcement mechanism to make U.N. member states comply with them.  In contrast, Iran sanctions worked because enforcement mechanism was enforced by sanctions legislation. There is now a rare convergence of sanctions policy between Washington and Seoul. Seoul’s suspension of the Kaesong Industrial Complex last week is a much-needed action that further constricts cash flow into Pyongyang’s coffers. Seoul finally admitted to suspicions that Pyongyang used this cash to “advance the North’s nuclear weapons and long-range missiles.”  This is an admission of Seoul’s continued violation of several UN Security Council Resolutions that require members states to “ensure that any funds ... are prevented” from use by persons involved in North Korea’s weapons programs, and prohibited member states from transferring funds to North Korea “that could contribute” to its nuclear or missile development.  This admission effectively spells the complete, verifiable, irreversible dismantlement of Kaesong

Lee: There are national interest waivers and exemptions in the case of the transfer of humanitarian goods into North Korea.  But the pressure on North Korea’s multifaceted illicit activities must be maintained. I would not be surprised if North Korea is designated as a jurisdiction of Primary Money Laundering Concern within the first year after this legislation takes effect.

RFA: Do you believe if this bill becomes effective tomorrow, it can really stop the flow of illegal money or foreign currency to the North Korean regime once and for all?

Lee: It will take time. It took three years for a combination of direct and secondary sanctions to devastate Iran’s diverse, oil-rich economy and bring it back to the bargaining table.  In the case of North Korea, it may take less time, because while the North Korean population is uniquely isolated from global trade and finance, the regime is preponderantly reliant on the flow of international currency, especially the U.S. dollar.  A recent U.N. report confirms Pyongyang’s continuing reliance on the dollar system, which gives the U.S. the leverage to constrict Pyongyang’s ability to pay its party elites, security forces, and military, at a time when Kim Jong-un is at once lashing out at the world and purging its military.  North Korea has probably gained proficiency at evading sanctions since Banco Delta Asia measures in 2005, but international financial institutions are sensitive to reputation risks and shy away from sanctioned or blacklisted clients.  They will shun North Korean entities just to thwart any financial risk.

The commentator Lee's use of the word "duplicitous" aptly describes Beijing's tacit ignoring of UN sanctions against North Korea. North Korea has still been able to obtain ample food, fuel, industrial goods such as replacement parts, and money laundering services through China mainly and Russia secondarily.