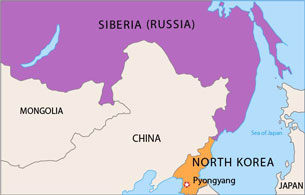 Loggers from China are replacing North Koreans for work in the Siberian timber industry.
RFA
Pyongyang is to close most of its forestry offices in Russia that oversee North Koreans dispatched to work as loggers in Siberia, according to a source.

The move comes amid a refusal by Russia to renew North Korean logging permits, preferring to engage more qualified and cheaper labor from China and Southeast Asian nations.

Nuclear-armed North Korea relies heavily on foreign exchange from logging operations in Siberia, in the central and eastern portion of Russia. A significant part of the salaries of North Korean loggers goes into cash-starved Pyongyang's coffers.

At least 10,000 North Koreans are believed to be working as loggers in Siberia.

A North Korean official from Rajin-Sonbong, who asked to remain anonymous, said “only five out of 15 offices” representing the forestry ministry in Russia will remain open, adding that the move will constitute “a very significant downsizing.”

The closure of the 10 offices stemmed from "pressure by the Russian government," the official said.

The list of offices slated to be closed has not yet been made public, the source said, quoting a North Korean Ministry of Forestry official dispatched to Khabarovsk, the second largest city in the Russian Far East.

But he said that the list had been made available to North Korean officials and security supervisors in Russia, while being kept strictly secret from North Korean loggers there.

If the loggers were to find out about the expected reduction of North Korean operations in Russia, he said, they would likely desert their workplaces en masse, which security agents could do very little to prevent.

A resident of Chongjin, in North Korea’s North Hamgyong province, said the withdrawal was “to be expected.”

“The Russian side did not extend logging permits to North Korea, and there was barely enough work or money, so the North Korean side was unable to even feed the workers properly.”

The same source, who worked in Russia as a logger before returning to North Korea early this year, said workers from China and Southeast Asia have “taken over” Russia’s logging business.

“They are better qualified to do the job, and are not demanding at all, so it is more difficult for us [North Koreans] to find logging jobs there.”

The Chongjin resident said that after earning seed money in the fisheries and garment businesses, Chinese who traveled to Russia in search of opportunities are now focusing on investing in Siberia’s construction and forestry industries.

He said farmers in three northeastern Chinese provinces, including Heilongjiang, relocate to Russia in large numbers to work at construction sites and as loggers, in order to earn more money.

These Chinese workers are qualified, industrious, and less demanding than North Korean labor, so the Russian authorities increasingly exclude North Koreans from opportunities to work in Russia’s logging industry, the Chongjin resident said.

Lee In Chul, a former North Korean logger who asked that his real name not be disclosed, managed to escape to South Korea with assistance from the United Nations High Commissioner for Refugees (UNHCR) office last year.

“The monthly salary per North Korean logger received by North Korean officials from the Russian authorities is U.S. $1,500, but workers only receive U.S. $100,” Lee said.

“Nevertheless, U.S. $100 per month is more than one can make in North Korea.”

Previous to 1995, North Korean authorities used to send food and snacks for loggers, in order to avoid spending hard currency on supplies.

However, after the food crisis worsened in North Korea, Russian authorities were asked to provide food for the loggers.

The same source explained that because working conditions are poor and pay low, many North Korean laborers escape from their workplaces.