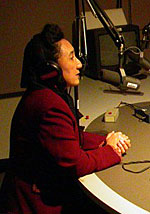 Rebiya Kadeer during her interview at RFA's studios in Washington DC. Photo: RFA >> See the slideshow: Face of Freedom

Kadeer was reunited here with her husband and five U.S.-based children last month after a release that coincided with a visit to China by U.S. Secretary of State Condoleezza Rice. She said she was keen to involve anyone in the international community who wished to understand the plight of Uyghurs.

Read a transcript of Kadeer's interview regarding women's rights.

"I want to make my fights international. I want to involve anybody out there who wants to get involved, so through that, I can help more people back home," Kadeer told Radio Free Asia (RFA) in an interview recorded last week.

"I need help in this fight, from the American government, from the American people, from anybody who shows concern for human rights. And through their support, I can fight on here and affect the [people] back home," she told RFA diplomatic correspondent Arin Basu.

I don't believe in failure. I believe that nothing is impossible.

Asked how she would deal with the problems of running a human rights campaign in exile, Kadeer said informing the world of Beijing's continued crackdown on Uyghurs who peacefully oppose Chinese rule was a major task.

"I don't believe in failure. I believe that nothing is impossible," Kadeer said. "The only way to overcome the concern [of] not having access back home is to make more people out here understand and realize the things that are happening in Xinjiang."

The Uyghurs are a distinct, Turkic-speaking ethnic group whose homeland enjoyed a brief period of autonomy as East Turkestan in the late 1940s, but who have lived under Chinese rule since 1949.

According to the State Department’s 2004 Human Rights report, Uyghurs continued to be sentenced to long prison terms and sometimes executed last year on charges of separatism.

My dream is to bring freedom to our people. And if it doesn't happen in my lifetime, I will pass this on to my children, to the younger generation, so that they will accomplish it one day.

Since the 9/11 attacks, Beijing has presented its crackdown on Muslims as part of the international war on terror.

The Chinese government said it prosecuted more than 3,000 cases in Xinjiang and held mass sentencing rallies attended by more than 300,000 people during its "Strike Hard" campaign, which officially ended in 2003.

"[We must] get more people involved outside of the country, so that they all stand by each other and actually voice the same concern and then let people all over the world know that what's happening in Xinjiang is actually affecting many people's lives," Kadeer said.

Kadeer said that the campaign for Uyghur rights and for the rights of women were closely linked. "Men and women, at the same time, should learn the same lessons," she told RFA.

"When men and women go hand in hand and fight together for the same future, then we can all accomplish something at the same time."

"One of the most important things we can do now is to get influence from the Western world and from Europe and have these influences in Central Asia. Women and men should learn to respect each other, and then we can accomplish more," Kadeer said.

"My dream is to bring freedom to our people. And if it doesn't happen in my lifetime, I will pass this on to my children, to the younger generation, so that they will accomplish it one day. That's my dream."

Kadeer arrived in the United States on March 17 after spending six years in a Xinjiang women's prison in northwest China.

Raised in poverty, Kadeer became a successful entrepreneur, held up as a model of Uyghur success by the Chinese authorities.

She received an eight-year sentence in 2000 for "endangering national security" after she tried to publicize China's heavy-handed treatment of Uyghurs overseas.

Before her arrest, Kadeer owned a department store in the northwestern city of Urumqi, ran the Thousand Mothers Movement, which helped Muslim women start and run businesses, and attended the U.N. 1995 conference on women in Beijing as a delegate.