China Launches Crackdown on Twitter Amid Calls For Protection of Accounts 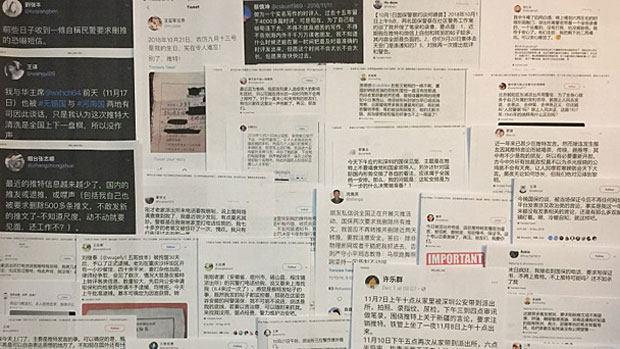 Tweets by Chinese netizens who have been interviewed by state security police are shown in an undated photo.
Yaxue Cao / ChinaChange.org

Now that government censors have reined in dissent on domestic social media platforms, China's "stability maintenance" regime is targeting critics of the ruling party and the administration of President Xi Jinping on Twitter, deleting a large number of accounts since last month, rights activists say.

"The Chinese government has been targeting Twitter users in China as part of a nationwide crackdown on social media, even though Twitter is blocked in the country," Yaqiu Wang, China researcher at the New York-based group Human Rights Watch (HRW) wrote in a recent report.

"Authorities have detained or summoned dozens or more Twitter users, forcing them to delete sensitive tweets or close their accounts," Wang wrote. "In some cases, authorities appear to have hacked accounts themselves."

State security police now appear to be targeting even those users with relatively few followers, with concerns expressed in interrogations and "chats" over the content of tweets, even though the content is visible only to Chinese users who have access to the right tools to circumvent censorship by the ruling Chinese Communist Party's cyberspace administration, Wang said.

"I discovered something was wrong when I tried to log onto Twitter ... on Dec. 15 but there was a problem," Wang said. "A bit later, I discovered that several thousand tweets of mine had all been deleted, and that my more than 1,000 followers had unfollowed me."

"I am certain that they did this via the accounts on my phone, because my phone number is tied to that Twitter account," he said. "They would have been able to use my phone to validate access to change my password and suspend my account."

"I wasn't able to regain control of my account until several days later, when I reset it using my e-mail address," he said.

Guizhou University professor Yang Shaozheng, who was fired after he made comments critical of the government on social media, said his Twitter accounts had been deleted outright.

"I wound up registering for three Twitter accounts, one after another, but I stopped using them one by one because I set them up using my mainland Chinese phone," Yang said. "I had previously thought that Twitter accounts couldn't be interfered with by anyone, but actually ... my Twitter accounts were hacked."

Last month, authorities in the eastern province of Shandong detained and questioned Hui Muslim poet Cui Haoxin, known  by his pen name An Ran, after he tweeted about growing religious oppression in China.

According to a transcript of the interview posted to Cui's Twitter account, police wanted to know his aim in writing such a thing on Twitter, which is blocked in China in the absence of circumvention tools to evade government censorship.

"Police ordered me to delete my Twitter account," Cui tweeted after his release. "I defied them and said [social media] accounts [are] personal property."

And in July, Shanghai-based Dong Yaoqiong was sent for "compulsory treatment" in her home province of Hunan after she streamed live video of herself splashing ink on a poster of President Xi in protest at "authoritarian tyranny."

Dong, who used the Twitter handle @feefeefly, is now being held as a psychiatric patient in a women's ward in Hunan's Zhuzhou No. 3 Hospital, where she was committed by her mother under pressure from the authorities, according to Dong's father.

"Some of the tweets authorities pressured Twitter users to delete were posted years ago. Few would have viewed the tweets had they remained," Wang wrote, adding that Twitter had previously been "a refuge of sorts for those who can’t bear the censorship on China’s social media."

Beijing-based sociologist Wang Jiangsong called on the U.S. government and Twitter to take steps to protect the freedom of speech of Twitter users.

"This latest clampdown has been centralized and on a huge scale ... we're not talking just a few hundred or thousand people who have been ordered to delete their accounts," he said. "China is rectifying Twitter, a U.S. company."

"Their arm is very long, and travels across borders, exerting control even over the internet in other countries," he said. "Can't Twitter and the U.S. protect the speech of users who have scaled the Great Firewall?"

Reported by Qiao Long for RFA's Mandarin Service, and by Ng Yik-tung for the Cantonese Service. Translated and edited by Luisetta Mudie.