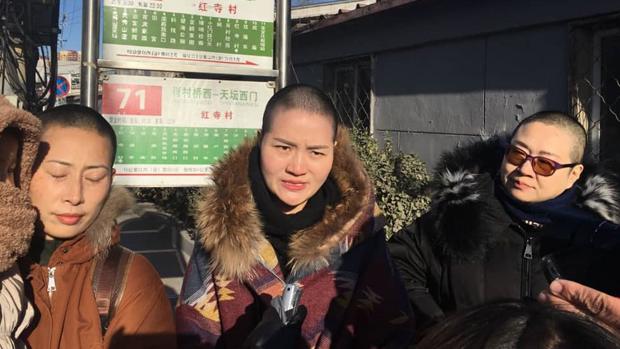 Wang Quanzhang's wife, Li Wenzu (C), and other activists speak with reporters after a scuffle with security personnel at the Supreme People's Court in Beijing, Dec. 28, 2018.
Photo courtesy of Li Wenzu

The wife of detained Chinese rights attorney Wang Quanzhang has hit out at his trial earlier this week, saying it was put on for "show," while a fellow rights lawyer said the ruling Chinese Communist Party is doubling down on a crackdown on the country's legal profession begun in July 2015.

Wang's wife Li Wenzu spoke to journalists after scuffles with uniformed security personnel at the Supreme People's Court in Beijing on Friday, where she was prevented from handing in a complaint about her husband's treatment.

"I couldn't get in," she said. "I wound up getting pushed and pulled away by [security personnel] who made a human chain and pushed me two blocks away."

"I never got near the main gate of the Supreme People's Court."

She said she went there to complain about her husband's treatment at the hands of the judiciary in Tianjin.

"The government's trial on Dec. 26 was held in secret because of suspected state secrets, with a lawyer that wasn't instructed by me," Li said.

"I have no knowledge of how the trial went. It was always going to be a question of going through the motions, and the whole thing was in serious breach of the law anyway," she said.

Li, who spoke with dozens of waiting journalists after being shoved away from the Supreme People's Court, said her complaint concerned the continual extension of her husband's pretrial detention, and the authorities' interference in his access to legal representation.

"Wang Quanzhang has been held for three-and-a-half years now, and they have been breaking the law this whole time, including in the trial," Li added. "The whole thing is just there for show."

Wang stood trial for subversion on Wednesday in the northern city of Tianjin, in a process slammed by an international rights group as "a cruel charade."

Initially detained in July 2015 as part of a nationwide police operation targeting hundreds of human rights lawyers and activists, Wang faced charges of "incitement to subvert state power" at the Tianjin No. 2 Intermediate People's Court.

"Defendant Wang Quanzhang, suspected of incitement to subvert state power, will today stand trial at the Tianjin No. 2 Intermediate People's Court," the court said in a notice on its official website.

"This trial will not be open to the public because it involves state secrets," the statement said. "The verdict and sentencing will be announced on another date."

Commenting on unconfirmed reports that Wang had fired his government-appointed lawyer in the first few minutes of the trial, forcing a retrial, rights attorney Xie Yanyi said Wang had the right to fire any lawyer instructed by him at least 15 days earlier, under China's criminal procedure law.

However, the court had said it would announce a verdict and sentence at a later date.

International rights groups have warned that Wang, who was held incommunicado at an unknown location for much of his detention, is at particular risk of torture and ill-treatment.

"The crux of this case is [the authorities'] fear that their torture of Wang will become public knowledge, so they don't want anyone in the public gallery, least of all his relatives," Xie said.

"Once this gets out ... the legality of the whole July 2015 crackdown [on rights lawyers and associated activists] would be utterly undermined by such a high-profile miscarriage of justice," he said.

Wang was taken away by police on Aug. 3, 2015, but his family was not informed of his whereabouts until July 2018, when a lawyer hired by Wang’s family finally met with him, saying that Wang "seemed very scared."

Reported by Wen Yuqing for RFA's Cantonese Service, and by Gao Feng for the Mandarin Service. Translated and edited by Luisetta Mudie.