Analysts see a new seriousness in shared U.S. and Chinese concerns over Korea, but predict less progress on trade.
2010-12-23
Tweet 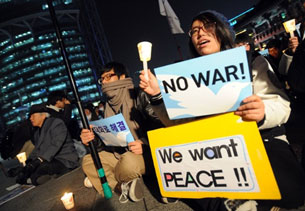 The White House on Wednesday announced the date of the visit, which comes amid lingering economic disputes between the two countries and growing security concerns on the Korean peninsula.

It will be the first State visit to the United States by a Chinese leader since former president Jiang Zemin’s trip in 1997. The United States had described an earlier visit to Washington by President Hu in 2006 only as an “official,” and less prestigious, event.

“The President looks forward to welcoming President Hu to Washington to continue building a partnership that advances our common interests and addresses our shared concerns,” the White House said in a statement.

“President Hu’s visit will highlight the importance of expanding cooperation between the United States and China on bilateral, regional, and global issues, as well as the friendship between the peoples of our two countries.”

The visit will mark “a major event in bilateral relations in the new era,” she said.

Tensions on the Korean peninsula following Pyongyang’s Nov. 23 artillery attack on a South Korean island are widely expected to be discussed by the U.S. and Chinese leaders.

Obama spoke to Hu on the telephone two weeks after the attack, stressing the need for China, North Korea’s main ally,  to rein in its nuclear-armed neighbor.

And U.S. officials this week credited Beijing with playing a key role in urging the North not to retaliate—as it had earlier said it would—to an artillery exercise South Korea held near disputed waters on Dec. 20.

"I think on the security front, the North Korea issue is going to dominate the agenda," agreed Bonnie Glaser, senior fellow for the Freeman Chair in China Studies at the Washington-based Center for Strategic and International Studies.

"And I think that there will be discussions perhaps on what to do in the near term—how to get back to the six-party talks, which is where China would like to go, what needs to be done, and what role China can play," Glaser said.

China-hosted six-party talks aimed at ending North Korea's nuclear weapons program have been suspended since December 2008 after Pyongyang withdrew from the forum in retaliation for international condemnation of its nuclear test.

Discussions on the "longer-term situation" on the Korean peninsula could follow in the future, Glaser said.

"I think that there has been tremendous interest in this administration, as well as prior administrations in the U.S., in coordinating with China in the event there is some instability in North Korea, if there is a humanitarian crisis."

The dispute over China’s alleged undervaluation of its currency, the yuan, is also expected to figure in discussions between the two leaders.

Trade relations between the world’s two largest economies have been strained in recent years by U.S. claims that China deliberately keeps the yuan low against the U.S. dollar to extract trade gains.

The artificially low value of the yuan has harmed U.S. firms, destroyed U.S. jobs, and added to a massive trade imbalance between the two countries, critics charge. U.S. lawmakers have threatened to impose trade sanctions on China over the dispute.

But talks between the two leaders during Hu’s visit are not likely to result in progress on this issue, said Derek Scissors, a research fellow in Asia economics at the Washington-based Heritage Foundation.

“I suspect—rather cynically, but probably accurately—that we’ll get a bunch of big-deal announcements that don’t add up to anything,” Scissors said.

Even if China’s leaders allow the value of their currency to rise, production will not return to the United States, he said.

“It’s going to go to other countries. So all that will do is move the American imbalance outside of China to Mexico, Vietnam, Indonesia—wherever.”

And though Chinese government subsidies to state-owned enterprises restrict U.S. access to China’s market, Scissors said, “I don’t think the president is in a position to come after the Chinese for anything meaningful.”