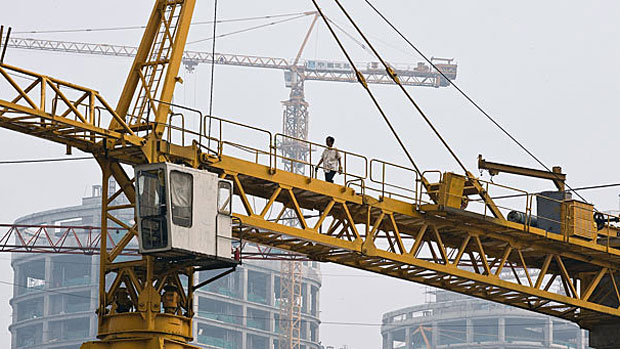 Worker walks on a crane at a Beijing construction site in a file photo.
AP

A strike by crane drivers in China's construction industry spread nationwide ahead of International Workers' Day on Tuesday, as operators demanded a pay raise through strike action in a number of cities.

Crane operators around the country had also planned further action on Tuesday, a day traditionally set aside to honor the workers of the world, with local police placed on alert in some places, sources said.

According to the China Labour Bulletin (CLB) Strike Map, crane operators were also striking for subsidies, overtime pay, and holidays in the northwestern province of Gansu, higher wages and overtime pay in Xiantao, Hubei, and for overtime, wage increases, and against wage arrears in Hengyan in central Hunan province.

Similar disputes were also seen in Zhumadian, Henan, and in Nanchang in the eastern province of Jiangxi, CLB said.

Witnesses told RFA that many of the striking crane workers took to the streets with banners highlighting their demands, but that protests were quickly suppressed by police in many areas.

Henan crane operator Huang Xin said he knew of more than a dozen strikes in the province, while police had moved in to suppress a similar protest in Henan's Zhengzhou city.

"Some people in Zhengzhou were arrested; I heard more than 20 people," he said. "The police took them away."

Huang said the crane operators feel that their pay is too low for such high-risk work, and are complaining of a total lack of paid overtime or rest periods.

"For example, if we are required to work for eight to nine hours, and then work more overtime at night, there will be no extra pay," Huang said. "You can work overtime until two o'clock in the morning, and the boss won't care. You will still have to work tomorrow as well."

"There are no health or social security benefits, no pension ... and no extra payments for working in the extreme heat of summer," he said. "When a project is completed, we lose our jobs, and then we have to start over again at another site."

"We have to work nine hours a day, and there are no rest days on Saturdays and Sundays," a crane worker from Jiangxi surnamed Chen told RFA. "There are also no guarantees that we will be able to take leave at Chinese New Year."

Government censors have rapidly deleted social media posts about the industrial action, while police have moved in to "maintain stability" and prevent further unrest on International Workers' Day, they said.

China's ruling Chinese Communist Party amended its labor laws in 1995 to require employers to pay staff for overtime, and to stick to a five-day working week, as part of its commitments to join the World Trade Organization.

But very few Chinese companies implement those requirements on the ground.

While collective bargaining has always been the most useful tool for the protection of workers' rights, according to labor activists, the Chinese Communist Party continues to crack down on nongovernment groups (NGOs), especially those involved in the country's nascent but unofficial labor movement.

But NGOs that work on human rights or civil liberties issues and rely on foreign funding are being targeted for police supervision, and those who lead strikes are often detained on public order charges.

Reported by Wong Siu-san and Lam Kwok-lap for RFA's Cantonese Service, and by Shi Shan for the Mandarin Service. Translated and edited by Luisetta Mudie.