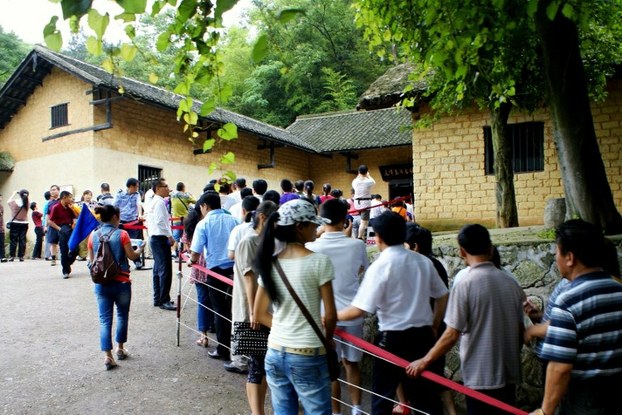 Authorities in the central Chinese province of Hunan are pouring immense financial resources into local anniversary celebrations for late supreme leader Mao Zedong, whose birthplace is in the province, official media reported.

China will mark the 120th anniversary of Mao's birth on Dec. 26, and the Shaoshan government has declared that the event overrides "any other" in importance, it said.

Meanwhile, the English-language Global Times newspaper, which has close ties to the ruling Chinese Communist Party, linked the celebrations to a bid by the new leadership under president Xi Jinping to bolster Maoist ideology in the Party's ranks.

"It shows that central authorities are trying to reinforce Mao Zedong Thought, in the context of growing inequity in society and the public outcry for a cleaner government becoming louder," it quoted Zhang Xixian, a professor with the Central Committee's Party School, as saying.

He said China's leadership still needs Mao to bolster its own legitimacy.

"China's leaders know very well that if they repudiate Mao, then the Chinese Communist Party will lose its basis for existing," Liao said.

"That's why Xi Jinping has decided to hold large-scale celebrations in honor of the 120th anniversary of Mao Zedong's birth this year."

He said the movement towards Mao in the Party is largely cosmetic, however.

"Chinese officials love projects, and everything they do has to be large-scale, because only big projects are photogenic," he said.

"Officials are bound to take this opportunity to do something big, given that Xi Jinping has forbidden them to build any more sumptuous and grandiose government premises."

China's netizens took issue with the move, however.

"How many social welfare issues could be solved with 1.9 billion yuan, in a province that isn't very wealthy?" wrote Nanjing-based microblogger @PPtongxie. "And when will they recoup that investment?"

And microblogger @dingdingdang added, echoing a concern expressed by several commentators: "What era are we living in? We shouldn't bother with this rubbish. They should use the money to take care of the elderly people and the kids who can't attend school [in Hunan]."

Chongqing tweet @boheng said there was little to celebrate, comparing Mao to a bloodsucking zombie: "When he was alive, he did evil things, and even after death he continues to suck the blood and eat the flesh of the nation's people."

"The bill for this meal will be 1.9 billion yuan."

And Chongqing-based netizen @hanwenlaoba commented, in a reference to a pivotal Party meeting of 1978 that heralded an era of post-Mao economic reforms: "Isn't this just a return to the personality cult? The third plenum of the 11th Party Congress was held in vain."

Former top Party aide Bao Tong, who was present at the 1978 third plenum, described an unprecedented atmosphere in which the damage done by the famines of the Great Leap Forward (1958-1960) and the political violence of the Cultural Revolution (1966-1976) were freely confronted in Party ranks for the first time.

"Pretty soon, everyone had turned their attention to talking about the past, and then the debates came thick and fast," Bao wrote in a 2008 commentary for RFA.

"They were talking about the Cultural Revolution, the Lushan meeting, the unresolved "political cases," and Mao Zedong."

"From the point of view of those...delegates sitting in the hall, it was the revolution they had never had," Bao said.

"Finally, they were able to debate the rights and wrongs of Mao Zedong, and to put the case of the ordinary Chinese people without fear or shame."

Reported by Xi Wang for RFA's Mandarin Service. Translated and written in English by Luisetta Mudie.