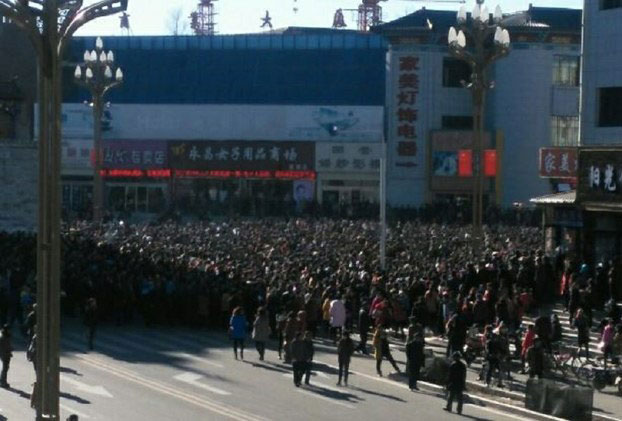 Protesters gather outside the Huadong Supermarket in Yongchang, Gansu, Dec. 30, 2015.
Photo courtesy of an RFA listener

Authorities in the far western Chinese province of Gansu on Thursday moved to calm public anger after clashes surrounding the apparent suicide of a young girl who was accused of shoplifting by a well-connected business owner, local sources said.

The girl, a 13-year-old resident of Gansu's Yongchang county, is believed to have jumped from the top of a tall building on Monday after being accused of shoplifting by staff at the Huadong Supermarket in Yongchang's county town, local residents told RFA.

The incident drew a crowd of around 1,000 local people who protested outside the supermarket, overturning police cars and beating up Jinchang's mayor Zhang Yinghua, according to social media posts quoted by the state-run Xinhua news agency.

"When they saw military vehicles driving to the scene, the people assembled there got angry, and a group of them stood in front of one vehicle, blocking its path," a local business owner surnamed Song said.

He said the crowd had begun gathering outside the supermarket on Tuesday, and swelled again to its peak of several thousand on Wednesday after being dispersed the day before.

The municipal authorities had dispatched some 1,000 riot police to the scene, prompting protesters to throw things at them, attack them, and overturn their vehicles.

"There was fighting, and some people overturned police vehicles, because the crowd was really very angry," Song said. "It was total mayhem."

A protester told RFA on Wednesday: "There were about 1,000 people there, and all of them were very worked up, as they would be when a person has died."

"It was a schoolgirl who lived in our residential compound."

An employee of Song's who gave only his nickname A Cai said at least 10 people had been detained.

"They detained around a dozen people ... and [the crowd] pretty much smashed up all of the police vehicles," A Cai said. "I saw 10 or more vehicles with broken glass."

Repeated calls to the Huadong Supermarket and the county government propaganda bureau rang unanswered during office hours on Thursday.

An officer who answered the phone at the county police department on Wednesday declined to comment. "I don't know about this," the officer said.

A source close to the girl's family said county government officials visited the family on Tuesday to begin "ideological work," and that the girl's relatives are now incommunicado.

"They family had demanded an explanation, and wanted to pursue whoever was responsible, so they sent in a team," the source said.

"The officials are all closing ranks and protecting each other now, and there's no way you can win against them. The person who did this has connections."

Many local residents said they had heard about the mayor's beating at the hands of protesters, but that they hadn't witnessed it first-hand.

"The mayor came out to talk to them at one of the intersections, where a lot of people were gathered," a resident surnamed Zhang said.

"I heard that the police started beating people first, because the crowd refused to leave."

Reported by Lin Jing for RFA's Cantonese Service. Translated and written in English by Luisetta Mudie.

This is the sort of "mass incident" that state-controlled CCTV or other Party mouthpieces such as People's Daily almost never report.