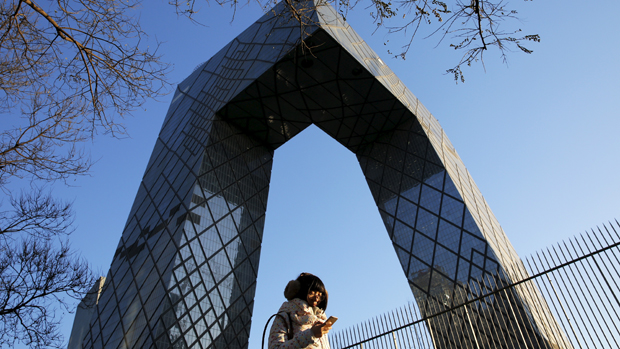 The headquarters building of Chinese state broadcaster CCTV, now listed by the US as a foreign mission, is shown in a file photo.
Reuters

China on Wednesday ordered four U.S. media organizations to hand over details of their operations in the country in retaliation over widening U.S. restrictions on its state media, which Washington says are propaganda organizations run by the ruling Chinese Communist Party.

"We urge the U.S. to immediately change course, correct its error, and desist in the political suppression and unreasonable restriction of Chinese media," Zhao told a regular news briefing in Beijing.

The United States and China have been engaged in a series of retaliatory actions involving journalists in recent months, amid increasing tensions over a range of issues from the coronavirus pandemic to Hong Kong.

The move came after the U.S. said last month it had added another four Chinese state media outlets to the list of agencies regarded as foreign embassies.

The State Department said in a June 22 statement that China's news organizations have been reorganized under Chinese Communist Party General Secretary Xi Jinping, who now exerts even more direct control over them than previously.

"[Chinese] media are beholden to the Chinese Communist Party," it said, designating the U.S. operations of state broadcaster CCTV, the China News Service, Communist Party mouthpiece the People’s Daily, and its sister-paper the Global Times as representatives of China on U.S. soil.

All the organizations met the definition of a foreign mission under the Foreign Missions Act, which is to say that they are “substantially owned or effectively controlled” by a foreign government, the statement said.

"In this case, they are effectively controlled by the government of the People’s Republic of China," it said, adding that the decision didn't refer to the content produced by these organizations.

"Entities designated as foreign missions must adhere to certain administrative requirements that also apply to foreign embassies and consulates in the United States," the statement said.

China in March effectively expelled around a dozen U.S. journalists from the New York Times, the News Corp-owned Wall Street Journal, and the Washington Post in retaliation over the initial announcement.

It also asked those outlets, as well as broadcaster Voice of America and Time magazine, to provide details of their China operations.

Reported by RFA's Cantonese and Mandarin Services. Translated and edited by Luisetta Mudie.