Authorities in the Chinese capital have seen a surge in applications to stage demonstrations in Beijing's "protest parks," after a top official sparked hopes that applications might lead to the redress of long-running grievances.
2008-09-13
Tweet 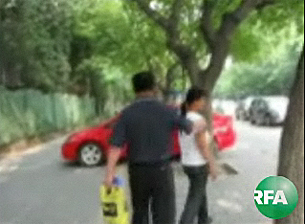 A protester in Beijing's Ritan Park is detained by police and escorted away from an interview with RFA.
RFA
China has seen a surge of applications in recent weeks for access to Beijing's official "protest parks" during the Paralympics, after an Olympics official hinted that applicants might get their grievances attended to in a bid to stop them going ahead.

"There has been a rush to apply to demonstrate by Beijing people," a Beijing-based petitioner surnamed Wu said. "It's all the rage. Everyone is applying to demonstrate. There were 20 people there in the time that I was there."

She said police had told petitioners they received more than 1,000 applications to protest during August following remarks from Secretary General of the Beijing Organizing Committee of the Games (BOCOG) Wang Wei.


Get the Flash Player to see this player.
A petitioner airs her grievance in Ritan Park, Beijing during the Olympics.

Around 800 of those were from people who had been evicted from their homes to make way for new development.

Wang has said that applications to protest are a gesture of trust in China's government, which he said had investigated 74 out of 78 applications, resulting in their voluntary withdrawal by the applicants.

Wu said petitioners had clutched at the process as a last-ditch attempt to get their cases involving alleged official wrongdoing heard while the eyes of the world were still on China.

'Trust in the government'

"If the whole point of demonstrating is to oppose the government, no one will go, because they are afraid that the authorities will have a bone to pick with them after the event, or that they'll be arrested," she said.

"But the way Wang Wei said it to the journalists, applying to demonstrate has nothing to do with dissatisfaction with the government. It's all about getting your grievances sorted out."

"The other day I went and there was a representative of the central government complaints bureau there, and two foreign journalists. The police were so nice to us then. They even poured us tea, and took notes," she said.

"They are very polite if there are journalists outside. If not, then they start criticizing you for this, that and the other."

In an apparent example of this shift in the underground mythology of China's urban dispossessed, one man from the northeastern province of Liaoning said he was put under house arrest after he applied to protest in Beijing by police from his hometown of Benxi, who also tried to stop him attending a Paralympics event.

A day after being contacted about Wang Zuopeng's case, the police changed their minds and let him travel.

Earlier this week, Wang withdrew his application to protest, saying the authorities appeared now to be investigating his grievance.

"The criminal suspicion I reported to police is that a real estate company illegally occupied about 10,000 square meters of houses previously owned by two enterprises but didn't compensate the residents," Wang said during his Beijing trip to watch the Paralympics.

"Furthermore, these acts were covered up by all government departments and officials involved in the case over the past two years," Wang said.

He said he wasn't being followed, and that he had suffered no police harassment in withdrawing his protest application, suggesting he had genuine hopes that his long-running complaint would finally be attended to.

Meanwhile, a crowd of several hundred petitioners gathered in Shanghai Wednesday outside the municipal complaints office. Some had been released from detention, while others had returned to the city after escaping detention during the Olympic Games.

"There were a particularly large number of petitioners today, maybe 400 or more," Shanghai-based eviction protester Zou Minwen said. "The police were also out in force. There was a big crowd."

"We went to the public security bureau to register our complaints, and they ignored us," said Zou, who has spent seven years pursuing a complaint about his family's eviction, to no avail.

China's protest parks have remained largely empty during the Olympics, with thousands of petitioners kept outside the capital by stringent security checks expected to remain in force until the end of September.

Original reporting in Mandarin by Xin Yu and Qiao Long. Mandarin service director: Jennifer Chou. Translated and written for the Web in English by Luisetta Mudie and Chen Ping. Edited by Sarah Jackson-Han.