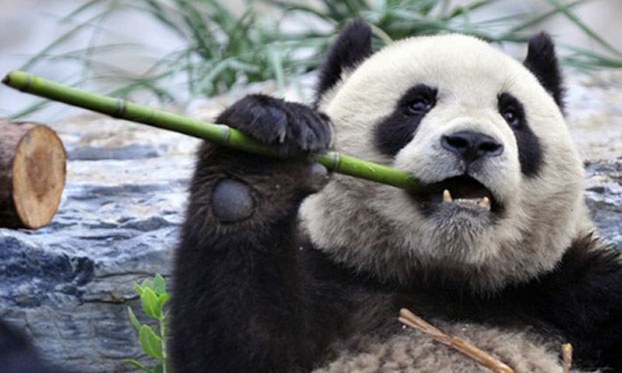 China's native giant panda, which was recently classified as vulnerable rather than endangered by the International Union for Conservation of Nature, in undated photo.

Now that China's iconic national treasure, the giant panda, has been taken off the list of endangered species, the government's wildlife protection strategy would benefit from a change in focus, campaigners have told RFA.The giant panda, native to the disappearing bamboo forests of southwestern China, was recently classified as vulnerable rather than endangered by the International Union for Conservation of Nature (IUCN), in a development that was largely welcomed by campaign groups.The move came as the IUCN reported a 17 percent rise in the panda population in the decade up to 2014, when 1,864 giant pandas were found in the wild in China.But even the Worldwide Fund For Nature (WWF), which uses the panda as its logo, said the news should spur governments to further efforts to save rapidly shrinking populations of wildlife."The recovery of the panda shows that when science, political will and engagement of local communities come together, we can save wildlife and also improve biodiversity," WWF chief Marco Lambertini said in a statement on the group's website.But he warned: "While the panda’s status has improved, other species are under increasing threat, including the Eastern gorilla, which is now listed as critically endangered primarily due to poaching."The Chinese government in particular has focused on the giant panda, while neglecting other endangered species, according to Grace Ge Gabriel, regional director for China at the International Fund for Animal Welfare (IFAW)."The Chinese government has actually poured a vast amount of money, manpower and effort into the protection of pandas and their breeding in captivity, because it views the giant panda as a national treasure," Ge Gabriel told RFA in a recent interview.

She said the tiger population, which became extinct in south China early this century, would have been a more valuable species to focus on."The Chinese government has actually poured a vast amount of money, manpower and effort into the protection of pandas and their breeding in captivity, because it views the giant panda as a national treasure," she said."In reality, the true value of a giant panda lies in its influence on its natural habitat, and in that respect, tigers are actually more important than pandas," Ge Gabriel said."Tigers are a species that China and Asia should be really proud of, but the Chinese government has fallen far short so far when it comes to the protection of tigers."But she said the government shouldn't cut its panda program as a result of its removal from the Red List of endangered species."I don't think this means that there should be reduced protection for pandas or their habitat in future," Ge Gabriel said."There is still a lot of work to do to ensure that those pandas bred in captivity are about to return to the wild."China has around 420 pandas in captivity, with more than 200 births at its research center in Chengdu.The government rents out pandas to overseas zoos in a gesture seen as a seal of diplomatic approval, but which is also highly lucrative for the ruling Chinese Communist Party.Before they can be released, the animals must be trained to recognize predators and socialize with their peers, a process fraught with difficulty as researchers say they still don't fully understand the species.Fewer than 10 pandas have been released to the wild in the past 10 years.Reported by Xi Wang for RFA's Mandarin Service. Translated and written in English by Luisetta Mudie.