Parents and commentators warn that Chinese officials may try to cover up the true extent of a public health crisis caused by tainted milk formula.
2008-09-23
Tweet 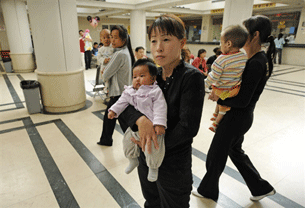 HONG KONG—Public outrage is mounting over a baby milk powder scandal that has sickened tens of thousands of infants across China amid calls for greater official openness.

"We are now collecting information and evidence," lawyer Li Jinglin said. "At the same time, we are providing free consultations to those who ask for help."

Li is one of a group of 20 lawyers from 10 different Chinese cities and provinces volunteering to help in the case. "We have drafted a class-action lawsuit petition to the Supreme People's Court as the scandal involves the whole milk industry," he said.

At least 53,000 babies have been reported sick after drinking baby milk formula contaminated with melamine.

The head of China's product quality regulator has resigned over the scandal, in which top executives of New Zealand-invested Sanlu Group and key local officials are accused of trying to cover up safety problems after the first complaints were reported in March.

The parent of one baby made ill by Sanlu powdered milk, surnamed Ling, said: "This is his mistake and he should resign. But this does not mean it can settle the issue."

"They hurt our babies, and in our hearts we can never be healed again. We are very disappointed," Ling said.

It was a struggle. We talked to doctors, parents, and Sanlu. Ultimately, we believed it was related to the milk powder."
Oriental Morning Post reporter Jian Guangzhou

Doubts have now been cast on a series of other milk products, with Mengniu, Scient, Yili, and Guangming brands also now removed from shelves.

Some hospitals have offered free medical checks to parents worried about their infants' health.

"All infants and toddlers can receive a free medical exam at 25 local hospitals," a resident of Jinan city in the eastern province of Shandong said. "Consumers will not buy brands that are on the blacklist."

"Mengniu, Yili, and Guangming are no longer brand name milk powders in China," said the woman, identified by her surname Yin.

She said product safety should now be the ultimate goal. "I don’t care who resigned. What I care about is the quality of milk, liquid and powdered alike."

However, some parents said they suspected local officials of trying to cover up the full scale of the scandal.

"Until now, no enterprise other than Sanlu has said a word," a parent in the southern province of Guangdong surnamed Liang said. "Our babies have drunk 'Scient' milk powder. Shouldn't the officials in Guangdong take responsibility too?"

Liang said the initial hospital report on her son said he was suffering from kidney problems, but then the hospital seemed to change its mind.

"A week later the hospital gave us a second report in a very simple form, saying that our son had no kidney problem. The report was much too brief. Much shorter than the first one," she said.

"We heard rumors that the local government was trying to cover up the incident and asked the hospital to change the medical report. We are very worried," she said.

"If the Chinese government tries to play down this incident, there will be no social stability in China, let alone harmony," said Bao, who has been under house arrest at his Beijing home since the fall of his former political chief Zhao Ziyang in the wake of the 1989 pro-democracy movement.

"It will mean that this government has lost the most basic level of trust."

"The incident illustrates that Chinese officials do not serve the people," a caller from the northeastern province of Liaoning said.

"They may say they want to serve the people, but in reality they function without the supervision of public opinion and a free press. They say what their supervisors want to hear; they don’t give a hoot about the health and well-being of the public."

"Chinese officials aren’t motivated by the desire to serve the people because they aren’t elected by the people," he added.

A caller from Shanghai surnamed Lin said: "Hu Jintao and Wen Jiabao both have skins thicker than the Great Wall of China. Have they no shame? Had these scandals happened in a democratic country, their presidents and premiers would probably have been kicked out of office."

"Under the dictatorship that is China, not only are Hu and Wen secure in their jobs, they are not even red in the face. The real problem is: They were not elected by the people," Lin said.

The authorities have so far detained a number of people in connection with supplying the contaminated milk powder, and investigators have also detained Sanlu group general manager and board chairman Tian Wenhua, according to the official Xinhua news agency.

The agency said Sanlu Group began receiving complaints about sick infants as far back as December 2007, but it didn't carry out tests until June 2008 when it discovered melamine was being added to milk to make it appear higher in protein than it actually was.

Sanlu didn't report the matter to the Shijiazhuang government until Aug. 2, which means it failed to take action for eight months, Xinhua quoted investigators as saying, but Sanlu still didn't go public with the news, waiting until Sept. 11 to recall baby formula manufactured on and before Aug. 6.

Oriental Morning Post reporter Jian Guangzhou was the first journalist to name Sanlu in his milk contamination story on Sept. 11. He started to investigate the story in early September, when 14 babies in Gansu were found to have  kidney problems.

"Other provinces, just like Gansu, have the same situation. So it may not be related to polluted water. What they had in common was their use of Sanlu baby formula," Jian said. "So I began to think their illness was related to the milk powder."

When approached initially for comment, Jian said Sanlu said there were no quality problems with their milk powder. "It was a struggle. We talked to doctors, parents, and Sanlu. Ultimately, we believed it was related to the milk powder."

Jian resisted pressure from Sanlu to delete the online article after it was first posted.

Bao said officials in the Party's powerful Central Propaganda Department, the Party secretariat, and Politburo were likely ultimately responsible, asking whether Party officials higher up the chain of command had quashed early attempts by Sanlu to investigate quality complaints.

"If I'm right, then any one of those departments should be indicted under the Constitution of the People's Republic of China, the Party constitution, and the documents of the 17th Party Congress, because not one of those departments has the right to interfere with the right of China's citizens to know the truth about this situation," Bao said in an essay broadcast on RFA's Mandarin service.

"The tainted milk scandal shows us that the more dark secrets are exposed, the better. You can't cure the disease, or save the Chinese people, until you get to the root of the problem."

The scandal is the latest in a string of product safety alerts in China in recent years. Melamine first turned up last year in Chinese pet food exported to the United States, where many cats and dogs developed acute kidney failure and died.