Labor Editors 'At Risk of Torture', Dozens of Labor Activists Behind Bars 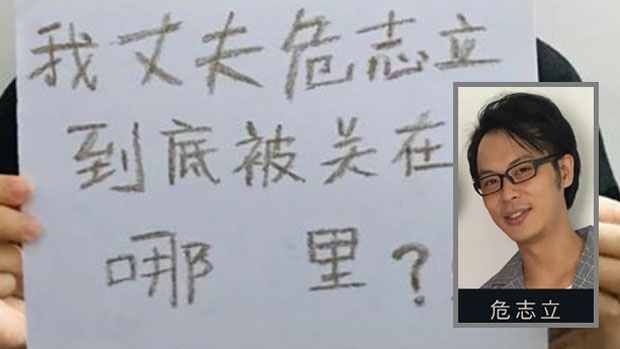 An undated photo of detained Chinese journalist Wei Zhili, editor of the labor rights news outlet iLabour.net, with a note by his wife, Zheng Churan, asking "Where has my husband Wei Zhili being detained?"
Zheng Churan

Two Chinese journalists who helped migrant workers pursue compensation claims are at risk of torture, while at least 50 labor activists are behind bars in China ahead of International Labor Day on Wednesday, rights groups said.Two labor journalists detained earlier this year in the southern Chinese province of Guangdong have since been placed under "residential surveillance at a designated location" (RSDL), a special form of detention that is often associated with torture, the Paris-based press freedom group Reporters Without Borders (RSF) said in a statement.Wei Zhili and Ke Chengbing, both editors of labor rights news outlet iLabour.net, were placed under RSDL on April 20, the group said.RSDL was set up ostensibly to handle individuals who pose a threat to national security, but "is very often associated with torture," it said."These journalists are in no way enemies of the state and only did their job by reporting on labor conditions in China," RSF's East Asia bureau chief Cédric Alviani said. He called on the ruling Chinese Communist Party to "end the repeated violations against press freedom, a constitutional right in China, and immediately release all detained journalists and bloggers."Australian blogger Yang Hengjun and Chinese journalists Wang Xiaolu and Zhen Jianghua are also being held under the RSDL system, which has been frequently used to target journalists, it said.Editor-in-chief Yang Zhengjun and his colleagues Wei and Ke all worked for the Xinshengdai (New Generation) website at www.ilabour.net at the time of their detentions.All three had criticized life-threatening working conditions in some Chinese factories, via their website which focused on news affecting China's tens of millions of internal migrant workers. They had also supported migrant workers from the central province of Hunan with compensation claims for pneumoconiosis linked to their workplaces.50 labor activists in detention

The online publication’s editor-in-chief, Yang, has also been detained by police since January.China will mark May Day this year with around 50 labor activists in some form of detention, according to the Hong Kong-based rights group China Labour Bulletin (CLB).Hundreds of workers with pneumoconiosis from Sangzhi county in Hunan's Zhangjiajie recently signed an open letter to China's official trade union, the All-China Federation of Trade Unions, calling for the release of Wei, Ke and Yang."They haven't done anything illegal, but they have been unfairly detained," a worker surnamed Wang told RFA. "In fact, they are being persecuted.""They cared about us, and helped us by making various suggestions," he said. "If they carry on persecuting people like this, then nobody will dare to help us, so that's why we have signed this letter in their support."Wei's wife Zheng Churan, who was one of five Chinese feminists detained ahead of International Women's Day 2015 as they planned a public campaign against sexual harassment, said she felt very sad on the migrant workers' behalf."My first feeling is extreme sadness, because these workers with pneumoconiosis have suffered so much hardship," Zheng told RFA. "Why does the world treat people like this just for helping others? Does it serve people of conscience right if they lose their liberty?""But at the same time, I am very moved at this targeted support for the three editors from our migrant worker comrades," she said.'Fight like a girl!'

Zheng recently began running towards a target of 10,000 kilometers in a bid to draw attention to Wei's case."I clocked up 4.04 kilometers today," she said via her Twitter account on Tuesday. "I was thinking about the Game of Thrones Episode 3 I saw last night.""The so-called woman who saves the world! Fight like a girl! ! !," Zheng wrote.CLB said labor activists are being targeted amid growing labor disputes caused by a huge imbalance of power in the workplace in favor of employers."The imbalance of power in the workplace is huge, and workers need help to redress it," the group said in a statement ahead of International Labor Day. "However, the crackdown on civil society labor groups has effectively neutralized many of those best placed to help."It called on the All-China Federation of Trade Union to "get their hands dirty.""They need to go to construction sites, factories, logistics warehouses and food delivery stations across the country and recruit workers to the union," CLB said.

"They need to galvanize workers, and help them elect representatives who are willing and able to take a firm stand with labor and against the exploitative and illegal practices of management.""For too long during the four decades of economic reform in China, nearly all the power in labor relations has been in the hands of capital," said, warning that workers will be forced in the face recurring abuses to take more and more extreme measures to protect themselves.Reported by Han Jie for RFA's Mandarin Service, and by the Cantonese Service. Translated and edited by Luisetta Mudie.