Citizen Journalism 'On The Rise'

Chinese Internet users are increasingly taking the news into their own hands.
2010-05-27
Tweet 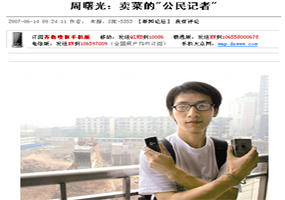 A screen shot from an article about citizen journalist Zhou Shuguang posted on www.dzwww.com.
RFA

HONG KONG—Citizen journalism in China is thriving in spite of tight government controls on official media and a speedy censorship system that blocks content the ruling Communist Party doesn't like, experts said.

"There's a lot of motivation in China right now for the fight against corruption," said Zhu Ruifeng, editor-in-chief of the anti-corruption Web site Supervision by the People.

"Particularly on the Internet ... netizens have been using public supervision to force some departments into probing corrupt officials. This strong force against corruption would never have got so large if it hadn't been for citizens working online," Zhu said.

Chinese spend more time online than netizens in any other country with the exception of France and South Korea, and are more likely to contribute to blogs, forums, chat rooms, and other social media like photo and video-sharing sites, recent surveys show.

"The ordinary citizen ... doesn't need any special powers or technical ability," said Hunan-based citizen journalist and blogger Zhou Shuguang. "All that is required is that you have some ability to access Internet services, for example social media services like Facebook or Twitter, in order to gather, edit, and disseminate news."

"Anyone can become a citizen reporter, and sometimes they can follow up clues in the news or take news reports a bit further," said Zhou, who shot to fame for his one-man coverage of a "nailhouse" homeowner who held out against big-time property developers in the southwestern city of Chongqing.

Xiao Qiang, director of the China Internet Project and an adjunct professor at the Graduate School of Journalism, University of California, Berkeley, said citizen journalism, in which ordinary people take the news into their own hands, has closely followed the expansion of Chinese Internet users, who now number around 390 million.

"The use of blogging, BBS forums, and even more the microblogging services, etc., really has become very commonplace," Xiao said. "More and more people are able to use the Internet to disseminate information."

Xiao said that China's tight censorship controls mean that individuals and grass-roots activists seeking to make information public could have a disproportionate impact on a society where people are constantly on the lookout for alternative news sources to state-controlled official media outlets.

"Sometimes all that a citizen journalist has to do is take a cell phone to a hotspot where a newsworthy event is taking place, because she or he will be able to report on matters that the official mainstream media will be forbidden to report on," he said.

"Chinese bloggers are operating in an excellent technological environment, even though the political environment is difficult ... and this gives the citizen journalism movement in China a huge amount of potential space to develop further."

Grassroots activist Zhu Ruifeng agreed that his work would not exist without the Internet.

"[Without it] we would have no channel—there would be nowhere for my voice to be heard; nowhere for my articles to be published," Zhu said. "That's why we say thank you to the Internet on a regular basis."

Since the rise of Internet usage in China, netizens are now in the habit of recording their experiences, conflicts, and day-to-day news events online, with ordinary people becoming more aware of the news value of daily events.

Zhou said he believes the trend is beneficial.

"I think that this shows a change in the consciousness of ordinary people, and it will do a lot to advance social progress by raising the level of cultivation in society, by fighting corruption, and by helping to protect people's rights and welfare," he said.

"It will also help to advance democratization. This growth and development of citizen journalism and citizen media will provide a huge boost to the establishment of a civil society as well."

China's 50 million bloggers are frequently subjected to censorship by their Internet service providers, but politically sensitive material also routinely falls through the cracks as individual companies interpret government guidelines in their own way, recent studies have shown.

"We are now seeing news, information, and opinion and commentary that is not reported or released by the official media appearing online, including photographs, video, etc., gradually beginning to appear online," he said.

"This phenomenon is filling the gaps and insufficiencies in official media coverage—the areas where it can't report things."