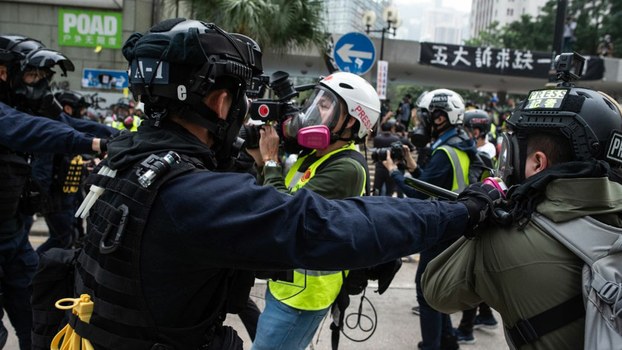 Police push a group of journalists after dispersing a crowd gathered for the 'universal siege on communists' rally at Chater Garden in Hong Kong, Jan. 19, 2020.

Public trust in Hong Kong's press freedom is at its lowest point since 2002, following months of anti-government protests and failing trust in the city government and the ruling Chinese Communist Party, a recent opinion poll has found.

"Net satisfaction with the freedom of the press in Hong Kong has dropped dramatically by 39 percentage points to negative 21, registering an all-time low since record began in 1997," the Public Opinion Research Institute said in a report released on Tuesday.

"[The proportion of] people believing the local news media to have given full play to the freedom of speech has also fallen sharply ... [while] the credibility rating of the Hong Kong news media drops significantly [to] a new low since 2002," the report found.

It said public satisfaction with the performance of news media in general had receded from a high point in August last year, falling by 13 percentage points.

Only 33 percent of the 503 respondents to the survey said they were satisfied with press freedom in the city, which was promised the continuation of its traditional freedoms of expression and association under the terms of the 1997 handover to China.

Lisa Leung of the department of cultural studies at Hong Kong's Lingnan University said that press freedom concerns have dogged the city ever since the handover.

"That is a huge fall since last August, and of course it reflects the impact of the anti-extradition movement," Leung said. "For example, the government brought in a mask ban using emergency legislation with no consultation whatsoever."

"This was a legal threat to people's civil rights."

She said the administration of chief executive Carrie Lam and the city's police force had taken an increasingly aggressive stance towards the media's reporting of their news conferences.

"[A lot of the information they put out] lacks relevance, and is sometimes just a way of explaining their own point of view," Leung said.

"The public has been figuring out from the tone of the press conferences that the government is moving ever closer towards authoritarianism."

Chris Yeung, who heads the Hong Kong Journalists' Association (HKJA), said police had been stepping up their harassment of and physical attacks on journalists throughout the protest movement, which broadened last summer to include demands for a public inquiry into police violence and fully democratic elections.

"There have been some restrictions and many obstructions to reporting activities, with some [police actions] directly threatening the personal safety of reporters," Yeung said.

"These actions have included consciously and deliberately pepper spraying reporters, as well as firing rubber and sponge bullets at them, injuring journalists in some cases," he said.

"There was also a recent case in which a TV reporter shoved by a police officer with a shield, and apparently deliberately pushed to the ground," he said.

"I think that all of this directly affects and threatens the freedom of the press, and of reporters to do their jobs," he said.

The HKJA wrote to Lam on March 10, saying that "countless reporters had been humiliated and injured by police officers" during the protest movement.

"Time and again you have assured you respect press freedom and that the police will enforce law in accordance with the law and the regulations," the letter said.

"Judging from numerous cases, the opposite is true. Is it a case that you, as the Chief Executive, are unable to constrain the police? Or you deliberately condone their use of force?" it said.

Earlier this month, Hong Kong's police chief Chris Tang wrote to the city's public service broadcaster RTHK to complain about a satirical TV show, which it says would ruin the image of the city's police force.

A Feb. 14 sketch in the TV comedy show "Headliner" had joked that officers are hoarding protective gear during the coronavirus outbreak, Tang wrote in an open letter to RTHK's Director of Broadcasting.

And a Feb. 28 episode had joked about the force ruling recent deaths in the city as "not suspicious," in an apparent side-swipe at the police response to the deaths of a number of young people during the pro-democracy and anti-extradition protest movement that has gripped the city since last June.

Rights groups warned in November that Hong Kong was in a state of humanitarian crisis after police fired more than 16,000 rounds of tear gas in recent months, with around 1,000 of those fired into the Chinese University of Hong Kong (CUHK) campus during a single day in November.

A January opinion poll by Reuters found that most of Hong Kong's residents supported the five demands of the protest movement, with more than one third of respondents saying they had attended a protest.

Only 30 percent said they were opposed, compared with 59 percent of those polled who supported the movement.

Plans by Lam to allow the extradition of alleged criminal suspects to face trial in mainland China sparked mass street protests, which were soon followed by widespread public anger at police use of force against peaceful demonstrators and demands for fully democratic elections.

In the 2020 worldwide Index of Economic Freedom, published by the Washington-based Heritage Foundation, Hong Kong slipped into second place behind Singapore, with its overall score decreasing by 1.1 points.

"Hong Kong’s economy was rated the freest in the world from 1995 through 2019. The ongoing political and social turmoil has begun to erode its reputation as one of the best locations from which to do business, dampening investment inflows," said the think tank report.