Beijing Metro to Begin Security 'Sorting' Based on Facial Recognition 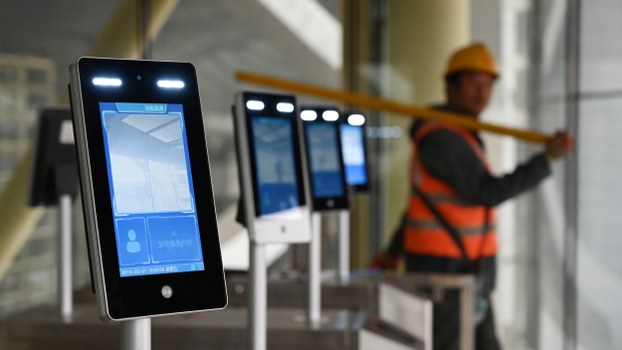 A construction worker walks past facial recognition screens at the entrance to the terminal building of the new Beijing Daxing International Airport, in Beijing, March 1, 2019.

Authorities in the Chinese capital are planning to use facial recognition on the Beijing metro system to 'sort' millions of passengers by estimated security risk.

The metro will be beefing up its "passenger credit system" that tracks the behavior of passengers across the network and penalizes anyone with a low score, officials said.

Currently, would-be passengers can be banned from buying plane tickets and high-speed rail tickets if they are found to have a poor "social credit" rating under a nationwide system of data-sharing about wrong-doers across different areas of life.

For example, someone who failed to comply with a court judgment could be penalized with a no-fly ban.

Xie Zhengguang, ruling Chinese Communist Party secretary for the state-run Beijing Mass Transit Railway Operation Corp., told a transportation forum in Beijing on Tuesday that a similar system already in operation in the city's metro network will be "strengthened" with the setting up of whitelists to enable people with no adverse history to move more quickly through the subway network after being scanned on entry by facial recognition technology.

Xie was quoted as saying by the Beijing News that whitelisted passengers would be fast-tracked through the security checks that are ubiquitous throughout the city, causing widespread delays and frustration as people line up to have their bags scanned before boarding trains.

He said the move would be part of a nationwide system social "joint punishment" social credit system based on data-sharing between government departments and state-run entities.

Zhan Minghui, director of the Beijing Rail Transit Command Center, said that security checks in their current form make for an inefficient service.

"We must constantly be improving our security inspection equipment, and vigorously promote the use of facial recognition technology to achieve passenger security classification," Zhan was quoted as saying by the Beijing News.

Classification criteria for people and corresponding facial recognition databases have been established by research, Zhan said, enabling the subway operator to "discriminate between people" using a facial recognition system and relay that information to security personnel who will act accordingly.

"The technique aims to improve the efficiency of security checks and includes both body checks and luggage screening when large numbers of passengers enter the station," Zhan said.

In 2018, passengers took 3.85 billion trips on the city's 22 rail transit lines, with some 13.7 million trips made across the network on July 12 that year, the China Daily newspaper cited official figures as saying.

The announcement about facial recognition comes after the Ministry of Transport published new regulations on Sunday calling for greater efficiency in carrying out security checks at subway stations.

The Beijing subway started "deducting credit points" from passengers who eat in railway carriages in May.

Facial recognition is widely used in China for everything from supermarket checkouts to surveillance.

Anyone wishing to use the Guangzhou Metro has to have a facial scan for the pilot scheme, which was slated to be rolled out nationwide.

Passengers on the network get a QR code for their smartphone containing their personal information when they pass the security gates, before passing through the facial recognition machine.

Passengers with a higher social credit score will be able to fast-track through the system, as the facial imprint is linked to big data about individual behavior and "trustworthiness" held by various government departments and law enforcement agencies, state media reported at the time.

"Will this blacklist identify and classify passengers into ... 'key' groups like dissidents and petitioners? We don’t know," he said.

"The way Beijing works right now, if some metro stations have different exits marked A, B, C or D, then the whitelisted people will go through a special A exit," he said.

He said the criteria for who does and doesn't represent a security risk can only be set by the police.

"The security inspections of urban rail passengers is carried out by subway company ... security personnel, but they will be directed and even managed by the police," Li said.

"I think the classification of passengers will be broadly in compliance with police regulations," he said. "For a person of interest like me in Beijing, I'm unlikely to be on the whitelist, because I won't meet the criteria."

"So I will have to take the non-whitelisted channel subject to special security measures, and could even be taken to the police station at sensitive times, or prevented from traveling," he said.

"They are treating the entire population as the enemy," Ye said. "Everyone is now a suspect."

"What are they afraid of? They just want to step up the pressure on ordinary people using various measures ... to create fear," he said.

Chinese citizens are already monitored by more than 20 million surveillance cameras as they go about their daily business in public places, according to a recent documentary by state broadcaster CCTV.

Now, artificial intelligence can identify and "tag" individual cars, cyclists, and pedestrians with distinguishing information that can be stored and searched for descriptions of wanted individuals.

The technology comes amid a growing trend towards using facial recognition as a secure form of ID, including to identify rail and airline passengers, physical and e-commerce customers, and in missing persons cases.