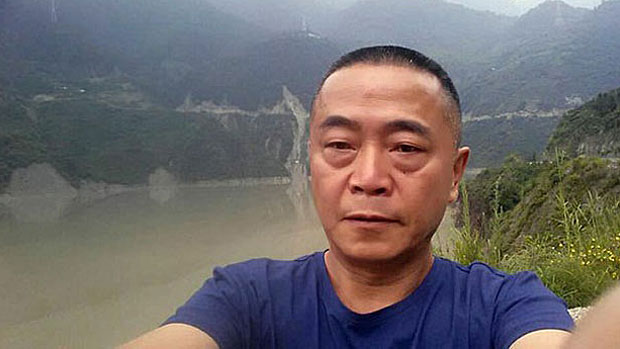 Authorities in the southwestern Chinese province of Sichuan have "fabricated" the case against ailing veteran rights activist Huang Qi, founder of the Tianwang rights website, while his trial has been repeatedly delayed amid fears that he may die in detention, his mother told RFA.

Huang's mother Pu Wenqing said she has documentary evidence that the authorities are deliberately carrying out an act of revenge on Huang after he helped some of the most vulnerable groups in China lodge official complaints against the ruling Chinese Communist Party and local governments.

"This case is fake; it has been fabricated," Pu told RFA. "Everything is being secretly manipulated by them."

He has been held in the police-run Mianyang Detention Center for more than a year, sparking fears that he may be subjected to torture or mistreatment as police try to elicit a “confession” from him.

The case is currently pending at the Mianyang Intermediate People’s Court, but his trial was canceled suddenly last week.

But Pu says that one of the supposedly "top secret" documents Huang is alleged to have shared overseas comes from a local neighborhood committee office, and is highly unlikely to be genuinely "Top Secret."

"If it were really a top-secret document, the staff members [of the neighborhood committee] would definitely have been detained too," Pu said. "They have set a trap for Huang Qi, and they want to see him dead."

Huang's trial had been scheduled for Jun. 20, but was canceled at the last minute with no explanation.

Huang's defense attorney Li Jinglin said the defense team has heard nothing since the trial failed to go ahead.

"We know that the so-called secrets consist of a document ... mentioned in the indictment that has been designated a state secret," Li said. "We don't know what these secrets supposedly consist of, because we haven't seen them. Actually, it's a little ridiculous."

"How can a report made on the handling of a complaint by a petitioner be a state secret?"

The document relates to a complaint made by Chen Tianmao, a former police officer of the Mianyang Public Security Bureau, who was petitioning the authorities over his disability. Tianwang posted an article on the case, that was later picked up by overseas media.

Huang's friend and fellow rights activist Wei Xiaobing said many petitioners had planned to show up to support him at his trial.

"More than 100 of them had planned to be there for Huang Qi's trials, according to my understanding," Wei said. "But Huang Qi's case is too sensitive, and was canceled for reasons of stability maintenance."

"Huang Qi has helped so many petitioners over a number of years, so everyone cares what happens to him."

Repeated applications for Huang's release on bail or medical parole have been ignored or turned down by the authorities.

Activists say the ruling Chinese Communist Party appears in recent years to be deliberately accelerating the deaths of political prisoners.

And human rights activist Cao Shunli died in police detention on March 14, 2014, after repeated requests for her release to seek medical treatment.

Cao was detained on Sept. 14, 2013, as she was boarding a flight to Geneva, where she was to attend a session of the U.N. Human Rights Council, where she hoped to participate in drafting China’s human rights action plans and reports for its U.N. human rights reviews.

Huang has already served a sentence of three years in prison from November 2011 after launching an investigation into shoddy school construction blamed for thousands of deaths during a massive 2008 earthquake.

Reported by Qiao Long for RFA's Mandarin Service, and by Wong Lok-to and Ng Yik-tung for the Cantonese Service. Translated and edited by Luisetta Mudie.