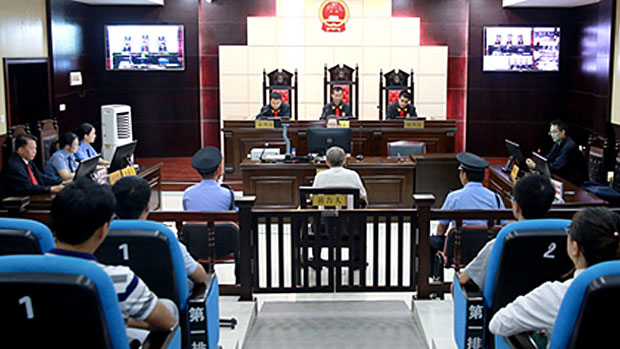 A court in the eastern Chinese province of Jiangxi has handed a suspended death sentence to an elderly man convicted of the killing of a local official during the forced demolition of homes in his village.

Police from nearby Ganzhou city detained Ming Jingguo after he was accused of bludgeoning local People’s Congress representative Zhuo Yu to death with a shovel on March 17, 2017 at a village in the city's Nankang district.

The Ganzhou Intermediate People's court sentenced Ming to death, suspended for two years, after finding him guilty of the "intentional homicide" of Zhuo.

The court found that Ming had reacted violently as his ancestral home was damaged by bulldozers brought in to demolish the house next door. However, Ming's family home was indeed demolished after the attack, his son told RFA on Thursday.

"Ming rushed to the scene with a shovel, and battered the head of local official Zhuo several times, causing him to die," the judgment said.

"The court held that Ming Jingguo deliberately deprived the victim of his life, and that his behavior constituted the crime of intentional homicide," it said, adding that the crime was cruel, malignant, and had very serious consequences.

But Ming's confession that he had "mistakenly believed" the earth-digger to be starting to demolish his home, his truthful account of the facts of the crime, and his subsequent remorse led the court to suspend his death sentence for two years, it said.

The case is a sensitive one in China, where petitioners have long complained of arbitrary detentions, beatings, and other forms of official retaliation after they lodge complaints, often about forced evictions, demolitions, and the loss of their farmland.

Ming’s son Ming Bangwei told RFA that his father had said he disagreed with the sentence when asked for his response in court.

"As soon as he heard the sentence, he immediately said that he wanted to appeal, and that this was a miscarriage of justice," Ming Bangwei said on Thursday. "The judgment was extremely biased in favor of the government, and the whole thing is very unjust."

"Lawyer Liu Wenhua told me that he could get a lighter sentence, based on the details of the case," he said. "But in the end, they didn't do that. They just want to save face for the government by oppressing vulnerable groups like us."

Ming Bangwei said his father took issue with the government's account that he misunderstood the situation.

"It's those words, 'mistakenly believed,' that are the tricky ones," he said. "Our government doesn't like to admit to the lengths it will go to."

"It is a fact clear as day that they demolished our home, so there was no mistake about it," Ming Bangwei said.

Lawyer Liu Wenhua declined to comment when contacted by RFA on Thursday.

"I can't give media interviews," Liu said, before hanging up.

And Ming's former defense attorney, who pulled out of the case citing health issues, also declined to comment.

A rights lawyer surnamed Wen said the authorities hadn't gone through the proper legal procedures before showing up at the Mings' village with a demolition team.

"If they had, then Ming Jingguo's actions would indeed have been excessive, and he wouldn't have been given a suspended death sentence," Wen said. "But the court isn't going to admit that the local government broke the law."

He said Ming's age meant it likely he would be able to apply for release on medical parole after a few years' good behavior.

"The prisons don't like having to keep elderly people inside ... because they can't do labor and they get sick and have to be given medical treatment," Wei said.

In 2016, authorities in the northern city of Shijiazhuang executed Jia Jinglong, who fatally shot a local official with a nail gun in protest over the forced demolition of his home, in spite of a massive public campaign for a reprieve.

Jia’s execution came after his death sentence was reviewed and approved by the Supreme People's Court in Beijing.

In a case that became emblematic of widespread anger over social injustice in China, the highest court ruled that Jia's crime was "extremely serious," and merited the death penalty.

Jia had pleaded guilty from the start to shooting his former village chief He Jianhua in the head with a nail gun, and to planning the attack, including his getaway vehicle.

He was convicted of intentional homicide and sentenced to death, and also deprived of his political rights for life on Nov. 24, 2015, by the Shijiazhuang court, and his appeal to the provincial-level court was rejected last May.

Reported by Yang Fan for RFA’s Mandarin Service, and by Wong Siu-san and Wen Yuqing for the Cantonese Service. Translated and edited by Luisetta Mudie.