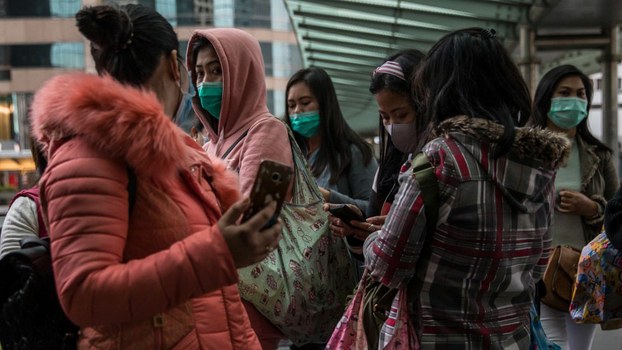 The number of deaths in the coronavirus epidemic rose to more than 800 on Sunday, passing the death toll from SARS, according to the latest official figures from China.

A total of 814 deaths from the novel coronavirus (nCov-2019) were recorded worldwide, with 780 of those in the central Chinese province of Hubei.

The number of confirmed cases rose to 37,592, with all but a few hundred reported in mainland Chinese cities and provinces.

However, the day-to-day rise in confirmed cases slowed by around 20 percent compared with the rise in new cases reported a day earlier.

Employees in the food and medicine industries will begin a staggered return to work starting from Monday, although tens of millions of people will remain in locked-down cities and communities across China, with schools, universities and public places on extended shutdown.

Experts have estimated that there are many more unreported cases of the coronavirus at the epicenter of epidemic in Wuhan and neighboring cities, as the regions' hospitals have been overwhelmed with the demand for beds, medication and test kits.

China's ambassador to the U.K. continued to insist on Sunday that the epidemic is "controllable, is preventable, is curable."

"The isolation and quarantine measures have been very effective," Liu Xiaoming told the BBC.

But social media users appeared confused at best and mistrustful at worst over the ruling Chinese Communist Party's handling of the crisis, and the mixed messages on prevention.

A global shortage of face masks has meant that a large proportion of China's 1.4 billion population have no way to buy them, raising concerns of a further spike in infections after several cases in eastern China were found to have had scant contact of any kind with known patients, and had merely visited local vegetable markets.

But Feng Luzhao, a researcher at the Infectious Diseases Division of the Chinese Center for Disease Control and Prevention told state broadcaster CCTV that the main transmission route is via droplets and contact.

Feng's comments ran counter to earlier warnings in state media that everyone should wear masks if they go outside, and to state media reports of suspected airborne transmission routes.

"At present, the main route of transmission of new coronaviruses is droplet transmission and contact transmission," Feng told CCTV. "There is currently no evidence that nCoV is capable of airborne transmission."

"The transmission distance is very short, usually one to two meters," Feng said. "The virus will remain suspended or floating in the air for any length of time."

Social media users were quick to point out the government's mixed messages.

"What about the problem of face masks for ordinary people?" commented @mingrensuozhang. "Taobao won't ship them, or is out of stock, they are unavailable in pharmacies, or they have been totally requisitioned."

"They tell us that we need to wear masks, but they won't get them for us," the user wrote. "A lot of people will have to go back to work in a few days, and they don't have any masks. What are we supposed to do?"

User @hanman agreed, commenting: "The problem is that people aren't able to get hold of surgical masks that meet the necessary standard ... Some people look like they're wearing masks, but they are wearing the same one over and over ... which increases their chances of catching the virus."

@yanling_198709 expressed skepticism, commenting: "I think it can be transmitted via the air."

"The credibility of these experts is getting lower and lower; you are treating us like monkeys," wrote @qigexiangliangdemingzi.

User @anxiangshuyinghengxie said officials told everyone at the start of the coronavirus outbreak that it wasn't being transmitted from person to person, which turned out not to be true.

"I want to believe this, but you told us at the outset that the extent of human-to-human transmissions was limited," the user wrote. "So I'm going to protect myself by not believing what you say."

@liulangzheOD added: "Couldn't the relevant departments have just come out with the truth from the start, instead of leaving the general public up the creek without a paddle?"

Meanwhile, authorities in Beijing have placed Jiang Yanyong, who shot to global fame as the whistleblowing doctor who exposed the extent of the SARS epidemic in 2003, under house arrest, The Guardian newspaper reported.

RFA reported in April 2019 that Jiang was incommunicado after writing to China's leaders calling the 1989 Tiananmen massacre a crime.

"He is not allowed to be in contact with people outside," Jiang's wife Hua Zhongwei told the paper.

"He is at home. He has no means of communication [with outside] ...

His health is not good. He is not in a good mental state either. He is not very well," she said.

In 1989, Jiang was a surgeon in active service at the Chinese People's Liberation Army 301 Hospital in Beijing, where he took part in the rescue and treatment of the injured during the massacre, which began on the night of June 3.

Jiang later shot to fame in 2003 as the doctor who blew the whistle on a massive cover-up by Chinese health authorities of the extent of the SARS outbreak in the city that year.

As Japan reported six more cases among 3,700 passengers and crew aboard the quarantined cruise ship Diamond Princess, authorities in Hong Kong freed thousands of people quarantined aboard the World Dream cruise ship after all crew members tested negative for the coronavirus.

The city has began enforcing a 14-day quarantine for arrivals from mainland China, although chief executive Carrie Lam has refused to shut down the border with mainland China entirely.

Nine members of a Hong Kong family were reportedly infected with the virus after sharing a family "hotpot" meal, health officials said.

A 24-year-old man and his grandmother, 91, were initially confirmed to have the virus. Hong Kong's Centre for Health Protection later said the man's father, mother, two aunts and three cousins were also infected.

Reports are emerging that some five million people left Wuhan, provincial capital of Hubei, ahead of the lockdown imposed by the city shortly after the Lunar New Year.

Nearly 70 percent of trips out of Wuhan were within Hubei province, while another 14 percent went to the neighboring provinces of Henan, Hunan, Anhui and Jiangxi, the Associated Press reported, cited Baidu maps data.

Some two percent went to the southern province of Guangdong, while others "fanned out across China," the report said, adding: "The travel patterns broadly track with the early spread of the virus."

Lai Shengjie, a former employee of China's CDC, said the five million who left Wuhan could have been carrying the coronavirus but without showing symptoms.

"Maybe they hadn’t developed symptoms but could transmit the virus,"

Lai told the AP. "We need to look at destinations across China and the world and focus on the main destinations and try to prepare for disease control and prevention."

The last trains left Wuhan the morning of Jan. 23, cutting off a surge of outbound travel that had begun three days earlier, according to the Baidu data.