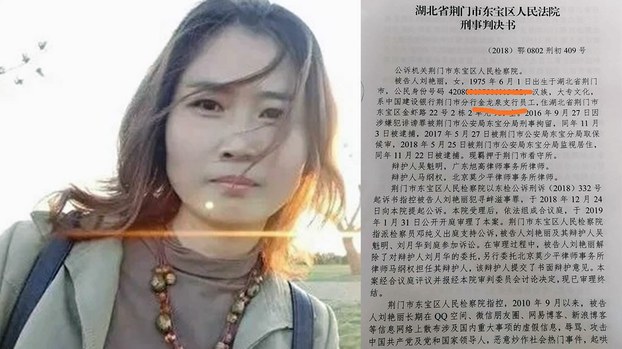 Authorities in the central province of Hubei have jailed a woman for four years after she used her social media accounts to criticize the ruling Chinese Communist Party and its leaders.

Liu Yanli was sentenced to four years' imprisonment by the Dongbao District People's Court in Hubei's Jingmen city, which found her guilty of "picking quarrels and stirring up trouble," a public order charge frequently used to target peaceful critics of the regime.

Liu, a 45-year-old former bank clerk, was accused of criticizing the ruling party and Chinese leaders, "maliciously speculating on hot topics in current affairs," based on social media posts from four years ago, her sister told RFA in a recent interview.

She had planned to appeal, but her sister said the authorities appeared to be deliberately delaying the appeal.

"I think they are deliberately obstructing our appeal," Liu's sister said. "We don't know if they are playing a double game."

She said Liu Yanli had pleaded not guilty at the trial and had refused to "confess" to the charges against her.

"We were pleading not guilty, because we have said all along that while Liu Yanli's comments may have been ill-considered, wrong even, they didn't constitute a crime," her sister said.

"They could have used disciplinary or professional guidelines to restrain her, but not the law and the machinery of the state to restrict her personal freedom," she said.

Liu had repeatedly blogged about rights issues on multiple WeChat groups, and campaigned in support of People's Liberation Army (PLA) veterans living in hardship, and called on officials to reveal details of their private wealth.

Liu reportedly attempted suicide while under police surveillance, at which point she was taken to Jingmen Detention Center.

"Everything she wrote is protected by the Constitution, but the Jingmen prosecution has no regard for the Constitution," the Hubei resident said. "Liu Yanli hasn't broken any laws; all her comments on Weibo and WeChat ... fall within the scope of freedom of speech."

"As for the claim that she insulted the country's leaders, freedom of speech means that every citizen has the right to criticize," he said.

Liu divorced her husband two years ago in a bid to protect her family from the consequences of her activism, sources told RFA.