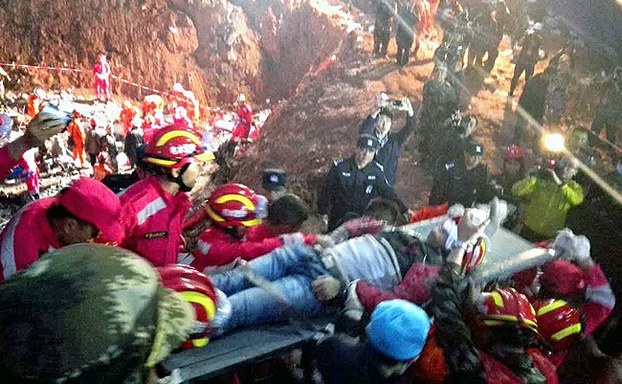 Chinese rescuers carry Tian Zeming after pulling him out of debris from a mudslide in Shenzhen, southeastern China's Guangdong province, Dec. 23, 2015.

Rescue workers on Wednesday dug a single survivor out of a huge mudslide that hit the southern Chinese city of Shenzhen earlier this week, as hopes of finding more people alive began to fade and more dead bodies emerged from the disaster.

Tian Zeming was pulled from the 10-meter thick mud with both legs crushed at 3:30 a.m. local time, official media reported.

Two people have been confirmed dead, while more than 70 are still missing following Sunday's disaster, as a 72-hour rescue window began to close, and hopes of more survivors in the buried Hengtaiyu industrial park began to fade.

Tian is in a stable condition in hospital, though he may face amputation, state news agency Xinhua reported.

An investigation into the causes of the disaster, which came after safety warnings from government environmental inspectors earlier this year, began on Tuesday with a police raid on the offices of the Shenzhen Yixianglong Investment Development Co., which managed the Hongao construction waste site.

The dump was still in use 10 months after it was supposed to have stopped taking waste, earning Yixianglong some 7.5 million yuan ($1.16 million) in fees, Xinhua reported.

Previous investigations of industrial accidents, which are very common in China, have blamed a lack of public health and safety awareness and neglected oversight procedures on the part of local officials.

Xinhua quoted urban public safety researcher Teng Wuxiao as saying: "The tragedies compel us to ask: why we did not recognize the safety hazards beforehand?"

"Compared with the ability to deal with the aftermath, we are still lacking risk assessment and disaster prevention," Teng said.

He said the risks associated with the Shenzhen construction waste dump "should have been foreseeable."

"As of noon on Wednesday, more than 1,800 local people were in temporary shelters, and some of them have been moved into 15 hotels in the hope of improving their living conditions," Zhang said.

Previously, evacuees had been housed in temporary accommodation in a district sports facility.

A migrant worker surnamed Chen who lived near the construction dump before its collapse said many people are now very anxious about missing friends and colleagues, more than 72 hours after the mudslide devastated the industrial district.

"Our factory was very close to the scene of the disaster," Chen said. "We are paying close attention, and we will do everything in our power to help [the rescue operation]."

"Emotions are running high, and we really want everyone to get out of this alive, but all we can do is pray," he said.

A local resident surnamed Xie called on the authorities to pursue those responsible for the man-made disaster.

"Things are serious, and they must find whoever is responsible," Xie said.

A local source familiar with the situation said operations like the construction waste dump usually run on the basis of government guanxi (connections).

"I know from previous cases that I have been involved in that there are a huge number of companies in Shenzhen that make a living out of winning contract tenders and then subcontracting them to other companies," the source said.

The source also said authorities had imposed an information blackout, forbidding journalists from pursuing independent inquiries into the disaster.

"They're not allowed to write about anything to do with the city leaders, the rescue teams, the crematorium vehicles ... or information about any of the companies," he said.

"They're not even allowed to talk about it among their own friends [on social media]," he said.

Officials at the Guangdong provincial propaganda bureau declined to answer questions about their instructions to journalists on Tuesday.

Reported by Ka Pa and Lin Jing for RFA's Cantonese Service, and by Xi Wang for the Mandarin Service. Translated and written in English by Luisetta Mudie.