The beating of an exposer of fraud highlights recent attacks against members of the Chinese media.
2010-08-31
Tweet 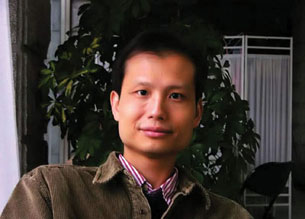 HONG KONG—A leading Chinese campaigner against academic fraud and fake remedies is recovering as police investigate a brutal attack against him in a Beijing alleyway, his lawyer said Tuesday.

Peng Jian, the legal representative of "science cop" Fang Zhouzi, said his client was recovering well after he was attacked over the weekend by two men, one of whom sprayed anesthetic in his face, and the other of whom tried to beat him with a hammer.

"The thugs planned to have one of them knock me unconscious with the anesthetic and the other one beat me to death with the iron hammer," Fang said in a dramatic account of the attack carried on his personal blog and translated by Hong Kong-based blogger Roland Soong.

The attack took place near Fang Zhouzi's home at around 5 p.m. Aug. 29 after he had finished an interview with Liaoning TV about Taoist master Li Yi, whose claims of superhuman feats of endurance he had investigated.

The Beijing municipal public security bureau posted on its sina.com microblog: "The police are investigating the attack on Fang and will reveal the investigation results to the public."

Chinese journalists and media are increasingly finding themselves the targets of threats and attempts at censorship by private-sector companies as well as government officials if their reporting damages vested interests, overseas rights groups say.

Both Fang Zhouzi and Fang Xuanchang said they are convinced the attacks were acts of revenge by persons they had discredited during the course of their professional lives.

"This was obviously retaliation by someone whom I had once exposed," Fang Zhouzi wrote of his attackers. "They waited near near my residence for a long time until they seized this moment."

"I hope that the case will be solved quickly, along with the case of Fang Xuanchang."

Peng said Fang Zhouzi had also received threatening texts and phone calls about a month before the attack, which resembled in its methods the earlier attack on Fang Xuanchang.

"[Like the previous attack], they also used anesthetic, and used extreme force, and didn't say a word. Both attacks appeared calculated to kill their target."

Peng said he believed the attack might be linked to Fang Zhouzi's campaigning against a controversial surgical operation known as "Xiao's procedure," which claims to restore bladder control to people with spina bifida or spinal cord injury.

Fang Zhouzi had recently published an article in the U.S.-based Journal of Urology, which concluded that Xiao's procedure was ineffective, and highlighted the cases of patients who had complained about it on his campaign website.

Xiao's procedure is designed to treat neurogenic bladder due to spina bifida, or spinal cord injury, and has been undergoing clinical trials in China, the United States, and a few other countries.

Xu Youyu, a former professor at the China Academy of Social Sciences, called the attack on Fang Zhouzi a serious incident, but not an uncommon phenomenon in today's China.

"Firstly, he is a courageous and genuine person who works to overturn fraud, fakery, and corruption in academic circles," Xu said.

"I don't think he will be put off by these threats. I am confident that he will continue his work."

Fang Xuanchang also said he believes that the attacks on himself and Fang Zhouzi were the direct result of articles they had written.

"Right now, it doesn't look as if there could be any other reason," Fang Xuanchang said. "This is revenge because we have angered someone with the articles we have written."

"At a personal level, [we] haven't made any enemies, so it's purely the articles. I think we can rule out other possibilities."

Some Chinese media carried front-page coverage of the attack on Fang, with netizens responding in shock and outrage and calling on police to find the attackers.

Original reporting in Cantonese by Hai Nan and in Mandarin by Xin Yu. Translated and written in English by Luisetta Mudie.