Chinese Internet users call for the release of a jailed AIDS activist.
2010-05-18
Tweet 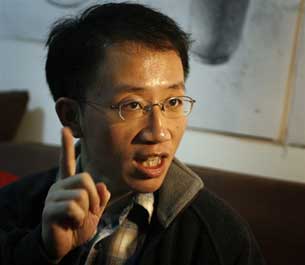 Hu Jia, photographed in 2007 while under house arrest in Beijing.
AFP

In a campaign on the social networking site Facebook titled "A Day Longer is a Day too Long," Hu's supporters called on people to mark World AIDS Vaccine Day by making phone calls to the authorities to support Hu's bid for medical parole.

"This grassroots campaign is calling for a day of action to remind the Chinese government that the world has not forgotten about Hu Jia," campaigners said in a statement on Facebook.

"We urge you to call the Chinese embassy in your country, the Beijing prison where Hu Jia is being held and/or the English-speaking line of the Beijing Public Security Bureau ... to express your concern about Hu Jia and demand that he be granted parole on medical grounds," it said, providing a long list of telephone numbers and call charges.

Hu's wife Zeng Jinyan, who is herself under close surveillance by national security police with the couple's young daughter, said that authorities haven't explained why her application for medical parole for Hu, who has hepatitis, had been denied five times.

"I have asked the prison authorities why, but they won't give a reason," Zeng said. "Hu Jia himself thinks it's very strange. He is very concerned about his health."

"He doesn't know what will happen next. Hu Jia is very very thin right now, although he's in fairly good spirits," she added.

Zeng said she has been "very worried" about Hu's health, especially after he was admitted to the prison hospital for tests last month.

Hu, 37, suffers from hepatitis B, and was admitted to the Beijing municipal prison hospital for a CT scan on March 30. Hospital authorities have refused to allow visits from Zeng or other relatives.

Medical parole has been granted in the past to top Chinese dissidents, including 1979 Democracy Wall activist Wei Jingsheng and opposition China Democracy Party founder Wang Youcai, who left China for exile in the United States.

Zeng said her chief concern is that the authorities might be covering up Hu's true state of health.

"The people there aren't telling the truth," she said. "The authorities said that Hu Jia's test results showed he was fine."

"Only later did I find out that actually there was increased cirrhosis of the liver, to the extent that the doctor at the [prison] hospital recommended he remain in hospital because he was too sick to get out of bed," she said.

An employee who answered the phone at the Beijing municipal prison Monday declined to comment on Hu's case.

"At an organization like the Beijing municipal prison, we ... can't accept requests for these sorts of interviews," the employee said.

"There aren't many channels through which it's possible to intervene in an emergency," Li said. "For example, the right to know the health condition [of an inmate]."

"We have seen no evidence of his health check, and our applications for medical parole have been refused ... We think that they are trying to avoid the issue," he said.

"We hope that this campaign from Chinese netizens will induce the prison authorities to sit up and take notice."

Wan Yanhai, a leading AIDS activist who recently relocated to the United States, said Hu's work was known and respected by AIDS activists in and outside China before he was sentenced to 3-1/2 years in jail for subversion in April 2008.

"The charges against Hu Jia were a political, trumped-up case through and through," Wan said. "They should never have convicted him on the basis of this sort of thinking."

"Hu Jia never used any form of violence to oppose the government. His expression of his opinion is part of the right of all citizens," Wan said.

Hu was jailed for "incitement to subversion" after he wrote articles online critical of China's hosting of the 2008 Olympics.

He was detained in December 2007 after spending months under virtual house arrest because of his civil-rights lobbying on behalf of disenfranchised people affected by the Olympics.

He had acted as a key source of information for foreign media on human rights and environmental violations, government abuses, judicial injustices, and mistreatment of dissidents.

Zeng, herself an AIDS activist and blogger who won an award from Paris-based Reporters Without Borders alongside Hu Jia last year, has kept up a campaign for his release, in spite of being under house arrest for a long period after the birth of the couple's baby, Hu Qianci.