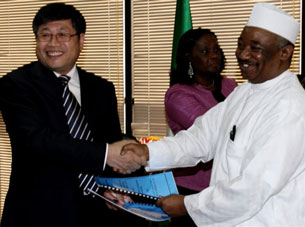 HONG KONG—Massive political and economic investment by the Chinese government in Africa over recent years is beginning to pay off for Beijing, with the inking of a U.S. $23 billion deal to build three refineries and a petrochemical complex in Nigeria, experts said.

"They are looking to use economic interests and economic diplomacy to secure the export of resources to China in the future," U.S.-based China economist Cao An said in a recent interview.

"China has been looking all along to set up basic infrastructure projects in Africa and to hunt for natural resources," Cao An said.

"There are benefits economically to Chinese investments there, as well as politically, because China now has another ally in Africa."

The deal is possibly the biggest that a state-owned Chinese company has ever clinched in Africa.

While Nigeria is Africa's leading oil producer, it has been importing refined petroleum products to meet local demand, owing to a lack of refining capacity.

The tie-up will be financed by the state-backed China Export & Credit Insurance Corp. and a consortium of Chinese banks, the two companies said in a statement.

U.S.-based China analyst Ran Bogong said China had obviously weighed the risks over the opportunities in clinching the deal in Abuja last Thursday.

"A lot of African countries, like Nigeria, don't have very stable political systems," Ran said. "Maybe a big political upheaval will happen, but China doesn't really have any other choices."

The companies both clearly identified their aims in agreeing to the projects.

"NNPC aims to accelerate the construction of new refineries in Nigeria to stem the flood of imported refined products into the country, currently estimated at U.S. $10 billion," the joint statement said.

Meanwhile, the Chinese side wants to "expand its presence on the African continent and establish its footprint firmly in the Nigerian oil and gas landscape," it said.

Corruption and poor maintenance have marred performance at Nigeria's existing refineries, which are currently operating at less than 30 percent of capacity.

The construction of the new refineries would also reinforce ongoing oil and gas reforms in Nigeria, the statement said.

Ran said Beijing appears to be moving at a good time in terms of public opinion in Africa.

"Recent opinion polls have shown that China has a good image among people in third-world countries, especially in Nigeria, where around 80 percent of people think China is a good thing," he said.

"This shows that China's political and economic efforts in Africa have borne fruit," he said.