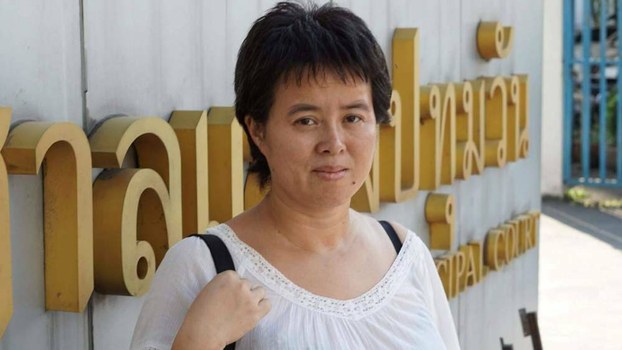 A Bangkok court has acquitted Chinese dissident Wu Yuhua of violating Thailand’s immigration law, her lawyer said Wednesday, three years after she and her husband fled their homeland, claiming they were targeted by Chinese police for taking part in press freedom protests.

“The court handed down a verdict on Dec. 25, 2018, acquitting the defendant who was tried for illegal entry, because she was proven to have necessary travel documents,” Warissara said.

“They are close to receiving asylum from a third country,” she added, declining to identify the country for what she described as security reasons.

Wu and her husband, Yang Chong, fled China and made their way to Thailand in February 2015, arriving at Bangkok’s Suvarnabhumi Airport.

They were arrested on Aug. 2, along with another Chinese national, outside the New Zealand Embassy in Bangkok, where they had hoped to persuade New Zealand officials to consider their asylum application.

Yang was tried and found guilty in November of remaining in the country after his visa had expired. He was sentenced to six months and a fine of 10,000 baht (U.S. $303), but allowed to walk free on a one-year probation because he had no criminal record, court officials said.

The couple told reporters they were initially targeted by Chinese police after taking part in press freedom protests in the southern city of Guangzhou in January 2013.

They fled to Thailand after Wu started a support group for Chinese human rights lawyer Gao Zhisheng, who disappeared in China’s Xinjiang region in 2010, lawyers said. The couple spent time in the town of Pattaya, about 100 km (62 miles) southeast of Bangkok.

The U.N. High Commissioner for Refugees (UNHCR) declared them political refugees in 2017. Lawyers said the couple then started looking for resettlement in a third country amid a global tightening of national immigration policies.

Yang earlier told the court he went to the New Zealand embassy to request asylum, but was detained following an argument over his request.

Thailand has a record of sending refugees from China back home.

In July, authorities in the southwestern Chinese city of Chongqing sent rights activist Dong Guangping and political cartoonist Jiang Yefei to prison after they were repatriated from Thailand where they were awaiting resettlement as political refugees. The incident prompted an international outcry.

Dong Guanping and Jiang Yefei were refouled to China in November 2015.

And what about China? If you were arrested in China you're dead.