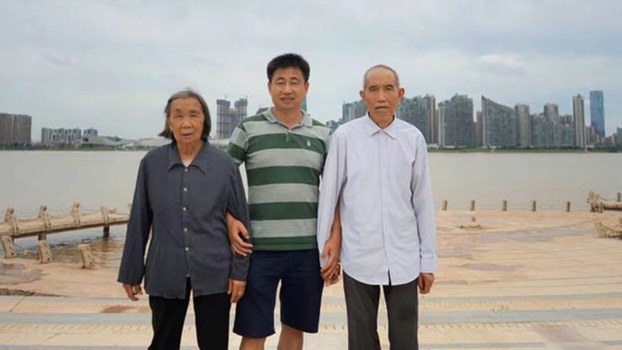 Hunan human rights lawyer Xie Yang, who was detained in China's July 9, 2015 crackdown on rights lawyers and subjected to abuse including torture and deprivation of food and water, poses with his parents in an undated photo.

Four years after the ruling Chinese Communist Party launched a nationwide crackdown on the country's human rights lawyers, the country's rights attorneys say they are now being prevented from practicing law at all.Hunan lawyer Xie Yang, who was initially detained on July 11, 2015, then tortured while being held under "residential surveillance at a designated location" in a government guesthouse, said human rights are as essential to human existence as food and drink."Dignity and justice are what make us human," Xie said. "[This is] not just [about] getting enough to eat."Xie, who was subjected to abuse including deprivation of food and water, and tortured again after being moved to the police-run Changsha No. 2 Detention Center following his formal arrest on Jan. 9, 2016, said the crackdown has largely achieved what the authorities set out to do."The terror campaign waged against rights lawyers was clearly pretty effective, because now the majority of of [human rights] cases can't find an appropriate lawyer to represent them," he said."The vast majority of lawyers have been controlled via the system of annual license renewals and other methods."Debarred rights attorney Tan Yongpei said the authorities are using less violent tactics to control human rights lawyers, but still with devastating effect."The strategy is now more about suspending or canceling lawyers' licenses and the forcible dissolution of law firms," Tan said. "This creates even more fear.""In one case, a human rights lawyer was investigated and the whole office was implicated, so the lawyer was too afraid to speak out," he said. "The Communist Party wants all lawyers to bear the party brand and be loyal to the party and to its leadership."Fueling popular resentment

Guangdong-based rights lawyer Sui Muqing said he is in a similar situation to Liu, and has been basically unemployed since losing his license 18 months ago.His attempts to appeal the decision or sue the government have met with stonewalling, with the courts refusing to accept his lawsuit."These methods don't just target lawyers; they target the whole population, both inside and outside the government system," Sui told RFA.He said the lack of access to justice will only fuel popular resentment of the administration of President Xi Jinping."Popular anger erupts very easily at the slightest thing because there are no other outlets for it," Sui said. "This can easily result in social turmoil."In Hong Kong, members of the Alliance in Support of Patriotic Democratic Movements of China marched to Beijing's Central Liaison Office and launched an online petition demanding the release of all detained rights lawyers.The group also hit out at the Hong Kong government for "ignoring the failings of the Chinese judicial system" in pressing for extradition of criminal suspects to mainland China, a move which has sparked weeks of mass protests and civil disobedience.Later the in day, supporters clad in black stood in seven minutes and nine seconds of silence outside Hong Kong's Court of Final Appeal to mark the anniversary of the crackdown, which began on the night of July 9, 2015 with the detention of Wang Yu, her husband and other colleagues at the Beijing Fengrui law firm.More than 300 lawyers, law firm staff, paralegals and rights activists were detained, summoned for questioning, or placed under surveillance and travel bans along with family members in the months that followed.

Many remain in detention

While many were subsequently released from detention, Yu Wensheng remains incommunicado, while Wang Quanzhang is serving a jail term for subversion and Li Yuhan and Chen Jiahong are in criminal detention.Jiang Tianyong has been released from prison but is still not free, while many more lawyers, including Liu Zhengqing, Wen Donghai, Chen Keyun and Liu Xiaoyuan have been stripped of their licenses, according to the China Human Rights Lawyers Group."The world was shocked by the mass detention of Chinese human right lawyers on July 9, 2015 [but] the relevant authorities not only have not ended their persecution of human rights lawyers; on the contrary, they have intensified their efforts," the group said in a statement on Tuesday."Authorities throughout the country [have also] subjected human rights lawyers to innumerable administrative punishments and professional disciplinary actions, and filed court cases to investigate lawyers," it said."Today, we once again commemorate the human rights disaster that took place in mainland China four years ago, and celebrate human rights lawyers who have made great sacrifices to defend freedom, democracy, the rule of law and human rights," the group said.Chen Yue, spokeswoman for the Hong Kong-based China Human Rights Lawyers Concern Group, said she fears the Chinese government will keep up the pressure on the beleaguered profession."Human rights lawyers have only ever been a small minority in the legal profession," Chen said. "That small minority were an important force in fighting for reforms and the rule of law, and also for democracy.""The authorities cracked down on them precisely because they saw how important they were," she said. "We don't want to see a situation...in which there is nobody left to defend human rights cases."Reported by Gao Feng for RFA's Mandarin Service, and by Wong Lok-to for the Cantonese Service. Translated and edited by Luisetta Mudie.

He too will die of cancer.