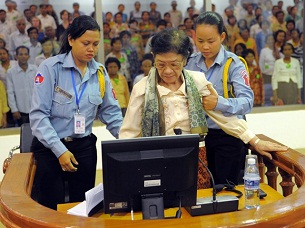 A U.N.-backed war tribunal in Cambodia announced Tuesday that it will be unable to pay its national staff for at least two weeks this month, highlighting ongoing financial concerns for the court which has drawn criticism for inefficiency and allegations of corruption.

The war tribunal, known formally as the Extraordinary Chambers in the Courts of Cambodia (ECCC), is trying members of the notorious Khmer Rouge leadership for crimes committed during their bloody 1975-1979 rule.

ECCC spokesman Neth Pheaktra said Tuesday that national personnel would not receive any pay because the court is dealing with a lack of cash.

“For the national side of the court, we are facing a cash issue … We don’t have cash to pay judges, prosecutors, or staff,” he said, adding that employees would likely face at least a two-week delay until they received their pay.

“The ECCC is working with donors to ensure that we receive funding for December.”

“I am concerned about the court’s process going forward,” Latt Ky said, adding that the concerns could be addressed by donors. He called on donors to continue providing funding to the court.

He said maintaining the independence of the ECCC’s national component is a crucial factor that donor funding has helped to ensure.

Cambodian Prime Minister Hun Sen, himself a former Khmer Rouge cadre, and other Cambodian officials have often expressed opposition to any further prosecutions in the tribunal beyond the ongoing second trial.

“Independence is a factor, but the donors should try to strengthen the court’s system of checks and balances [instead of dropping the funding],” he said.

“I think the donors don’t want to pressure the court by ceasing its funding. The donors should set conditions for the court [instead].”

The delay of staff payment follows a pledge by the United Kingdom of 600,000 pounds (about U.S. $1 million) to the ECCC’s international component last week, with UK Foreign Secretary William Hague saying the pledge would help deliver “long-awaited justice for millions of Cambodians.”

The UK has contributed U.S. $5.4 million to the court’s international component and U.S. $1.5 million to the national side since its inception in 2006. The new pledge brings to U.S. $7.9 million the UK contribution to the ECCC.

Neth Pheaktra on Tuesday expressed gratitude for the pledge, but called on donors to also consider the court’s national component when providing funding.

He said that the court had received no pledges for the 2013 national budget as of yet, adding that the national component only has around U.S. $2.5 million in reserve, but will require around U.S. $9.5 million to operate for the year.

Donors will convene later this year or early next year to discuss funding, he said.

The ECCC has been working for six years to deliver justice for the up to two million Cambodians who died of disease, exhaustion, starvation, and execution under the ultra-Maoist Khmer Rouge government.

The elderly defendants it has brought to trial face charges of war crimes, crimes against humanity, and genocide.

But after spending more than U.S. $150 million, the tribunal has handed down only one sentence and has been mired in allegations of corruption and interference.

In November, the ECCC reduced its hearings to three days per week from four due to financial constraints, prompting former victims to question whether defendants will live to see a verdict.

The court acknowledged at the time that the reduction of hearing days would delay its ongoing second case involving four former leaders, including 80-year-old Ieng Thirith who was released in September because she was deemed mentally unfit to stand trial.

But last week, the ECCC ordered a “regime of judicial supervision” against Ieng Thirith, setting aside the September decision and subjecting the former social affairs minister to measures including medical examinations every six months and a monthly check by judicial police to verify that she resides at the same address.

In its only conviction, the ECCC sentenced Kaing Guek Eav to life imprisonment in February for overseeing Tuol Sleng prison where as many as 16,000 men, women, and children are believed to have been brutalized before being sent to their deaths.

The World wastes money for this court which Hunsen always interferes to have the verdict delayed. It is enough UN, you should give all these defendants to crocodile, shark or Tiger are better because, we Cambodians will not get real justice at all on account of lackey Hunsen, slave of Hanoi's unwillingness.