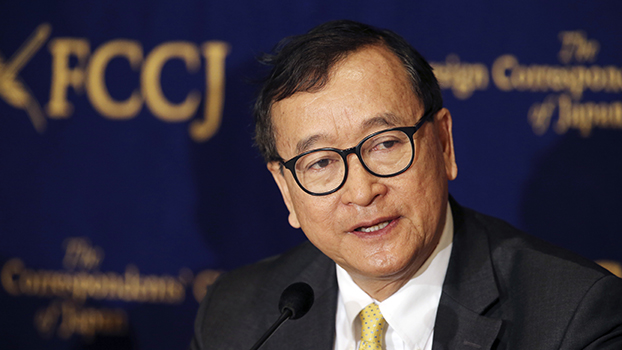 In this April 13, 2018, photo, Cambodia's self-exiled opposition leader Sam Rainsy speaks during a press conference in Tokyo. Rainsy vowed to return to Cambodia in 2019 at a CNRP open forum event on Sunday.
AP

Cambodian opposition politician Sam Rainsy, living in self-imposed exile since 2016, has vowed to return to Cambodia in 2019 to fight for democracy, amid stark divisions among the government’s political opponents.

Recently appointed as the acting president of the Cambodia National Rescue Party (CNRP), Sam Rainsy made the pledge to return at a public forum for party supporters in Paris on Sunday.

“I am asking all Cambodians to rise up and join me at that time, so that we can jointly fight for real change,” Sam Rainsy said, adding, “We need to stand up against Hun Sen and bring back democracy in 2019.”

Sam Rainsy had cofounded the party in 2012 after merging his Sam Rainsy Party with Kem Sokha’s Human Rights Party. Sam Rainsy served as the new party’s president, but stepped down while in exile in Feb 2017 in favor of Kem Sokha, who was then vice president.

However, with Kem Sokha currently under house arrest while awaiting trial on charges of treason, Sam Rainsy became acting president on Dec. 9 after being nominated during a two-day international conference of the CNRP in Atlanta that was boycotted by Kem Sokha’s supporters.

The two factions of the CNRP had differing reactions to Sam Rainsy’s promise to return.

CNRP lawmaker Mao Monivan, who left the Sam Rainsy Party for the Human Rights Party prior to their merger told RFA’s Khmer Service, “It’s too little too late now!”

“Sam Rainsy should have returned to Cambodia in the immediate aftermath of the dissolution of the CNRP,” he said.

Mao Monivann also lashed out at Sam Rainsy for creating the Association for Democracy in Cambodia and the Cambodian National Rescue Movement, two pro-democratic organizations that call for reform in Cambodia that were set up to be run by him in exile.

Both organizations were created shortly after the CNRP was banned, and Kem Sokha supporters view them as Sam Rainsy’s acceptance of the party’s dissolution.

As part of a move to inform the international community and an effort to promote transparency, the CNRP issued a statement to the U.S. State Department detailing how Sam Rainsy was appointed as acting president.

The statement explained that one of the CNRP’s top priorities is to fight for the release of Party President Kem Sokha, but made no mention of any factionalism within the party.

Speaking to RFA on Tuesday, Party Vice President Eng Chhai Eang said that the statement should serve as notice to the international community of the party’s temporary change in leadership until they can secure the release of President Kem Sokha and he is cleared for a return to politics.

“The CNRP at the moment can’t proceed without a leader,” Eng Chhai Eang said. “We need a transitional leader to lead the party in our campaign [to restore democracy in Cambodia.]

He said that the statement was the first official communication of the party since Sam Rainsy’s appointment.

Meanwhile, political commentator Kim Sok said that Hun Sen is now cornered as the EU and the international community are pressuring him for the restoration of human rights and democracy in Cambodia.

Kim Sok was supportive of Sam Rainsy’s promise to return.

“It’s very necessary that he returns to Cambodia during this very critical time, when Cambodians need a leader who can unite them in fighting for human rights and democracy,” said Kim Sok.

Kim Sok stressed that unity within the CNRP is of the utmost importance, but the party seems to be anything but unified over the prospect of taking leadership.

“I don’t believe Sam Rainsy will return to Cambodia in 2019,” he said, writing on the Telegram messaging app.

“Sam Rainsy remains a coward. He is very good at lying too,” he continued.

“This is not the first time he has lied about his return to Cambodia. His call for people to rise up against the government is a provocation for revolt,” Sok Eysan wrote. “If he returns, we will surely welcome him in prison, where he will be detained as soon as he sets foot on Cambodian soil.”