Six to Face Punishment For Crackdown on Protest in Cambodia's Sihanoukville 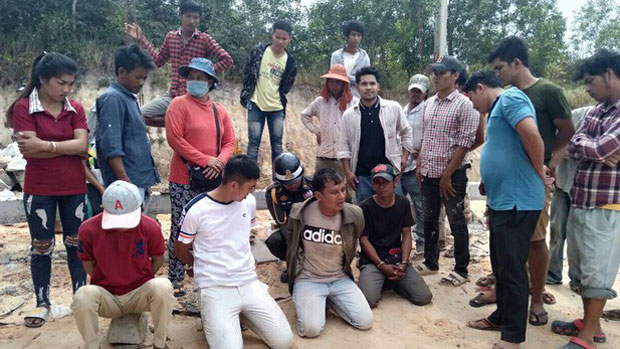 Five Cambodian police officers and a soldier will be punished for their role in suppressing a land-rights protest on Jan. 24 in southwest Cambodia’s Sihanoukville province, with two cases already referred to the courts for action, a police spokesperson told reporters on Monday.

Five members of the Royal Gendarmerie, the Cambodian military police, now face “administrative measures,” Eng Hy, a spokesperson for the unit tasked with maintaining internal security in the country said.

“Among these, the case of an officer named Sok Thearith has been compiled and forwarded to the court on the grounds that he used violence against a resident,” Eng Hy said, adding that a soldier named Chan Mao had struck another villager with his assault rifle during the protest.

“Thus, the case of that soldier will also be referred to the court,” Eng Hy said.

Eng Hy said that the four facing discipline outside the courts, a deputy commander of the Gendarmerie named Pen Vibol and three other officers, will be subject to written reprimands by their units for having failed to prevent live fire which struck one villager in the chest, leaving him critically injured.

Six villagers were also arrested following the crackdown on a protest against the forcible eviction of residents from land in southwest Cambodia’s Sihanoukville province, in the country’s first violent police crackdown since a July election widely seen as unfree and unfair.

Villagers clashed with police armed with assault rifles and shields who tried to evict them using tactics described as “brutal and unacceptable,” following a Supreme Court decision to grant their land in Sihanoukville’s Prey Nob district as a concession to a wealthy businessman.

Residents of the site said they had occupied the site since 2002, with several having bought land from other villagers, and were surprised to suddenly learn that it belonged to the businessman.

The bullet that struck the injured villager had not come from an assault rifle carried by the Gendarmerie, but from a pistol, Eng Hy told reporters, adding that while pistols were also carried by the military police, the wounding shot had not been fired by them.

“The bullet that struck the victim was not fired by the Royal Gendarmerie,” he said.

Authorities are now conducting further investigations to identify the offender and bring him to justice, he added.

Speaking to RFA’s Khmer Service, Am Sam Ath—head of investigations for the Cambodia-based human rights group Licadho—said that it should not be difficult to discover the truth, “as long as there is the genuine will to do so.”

“An organization like the Royal Gendarmerie can examine the bullets from all of the guns that were used, and by looking into this, the case can be solved,” he said.

“If officers in charge of enforcing the law or a ruling of the Supreme Court fail to properly enforce a case according to the law, they should be subject to punishment in accordance with the rules or procedures of the Supreme Council of the Magistracy or the Ministry of Just,” he said.

Land disputes are a bitter problem for Cambodia, where rural villagers and urban dwellers alike have been mired in conflicts that the U.N.’s special rapporteur for human rights in Cambodia has warned could threaten the country’s stability.

The country’s land issues date from the 1975-79 Khmer Rouge regime, which forced large-scale evacuations and relocations, followed by a period of mass confusion over land rights and the formation of squatter communities when the refugees returned in the 1990s after a decade of civil war.

In September, more than 400 villagers from 13 communities in Sihanoukville province staged a protest demanding that a local court drop charges against four locals detained by authorities for “violently occupying” disputed property.

The four had tried to reclaim land seized by several wealthy individuals more than a decade earlier because property prices are increasing in and around the resort city of Sihanoukville, where Chinese investors are buying up plots to build casinos.

Saddam Hun Sen feels strong and does what he wants because of Chinese support. As long as the Chinese will go on supporting him oppression on Cambodian people will never come to an end even after Hun Sen's death.