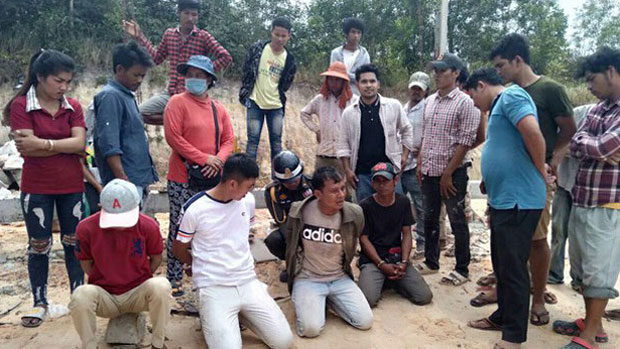 “Today, I forced myself to fire two Sihanoukville deputy governors,” Hun Sen said, adding, “I must remove the gravel and sand from my shoes in order to move forward.”

No reason for the officials’ termination was given in the order, though Hun Sen also on Friday said at the ground-breaking ceremony for a Chinese-funded hospital in Cambodia’s Tboung Khmum province that officials who break the law “will be punished.”

“Their employment will be terminated, or they will face more serious prosecution in accordance with the law,” he said.

Calls seeking comment from Sihanoukville provincial governor Yun Min rang unanswered on March 1, though Ministry of Defense spokesperson Chhum Socheat told RFA he has now been ordered to investigate the role played by provincial military commander Savin Vibol in the forcible eviction of the villagers in January.

“We have received the order. We met this morning to carry out an investigation of the case," he said, adding that if Savin Vibol is found guilty, he will face punishment according to the law.

Five members of the Royal Gendarmerie, the Cambodian military police, already face “administrative measures” for their role in carrying out the crackdown, Eng Hy, a spokesperson for the unit tasked with maintaining internal security in the country told reporters in Cambodia earlier this week.

“Among these, the case of an officer named Sok Thearith has been compiled and forwarded to the court on the grounds that he used violence against a resident,” Eng Hy said, adding that a soldier named Chan Mao had struck another villager with his assault rifle during the protest.

“Thus, the case of that soldier will also be referred to the court,” Eng Hy said.

Eng Hy said that the four facing discipline outside the courts, a deputy commander of the Gendarmerie named Pen Vibol and three other officers, will be subject to written reprimands by their units for having failed to prevent live fire which struck one villager in the chest, leaving him critically injured.

Six villagers were also arrested following the crackdown on a protest against the forcible eviction of residents from land in southwest Cambodia’s Sihanoukville province, in the country’s first violent police crackdown since a July election widely seen as unfree and unfair.

Villagers clashed with military police armed with assault rifles and shields who tried to evict them using tactics described as “brutal and unacceptable,” following a Supreme Court decision to grant their land in Sihanoukville’s Prey Nob district as a concession to a wealthy businessman.

Residents of the site said they had occupied the site since 2002, with several having bought land from other villagers, and were surprised to suddenly learn that it belonged to the businessman.

Speaking to RFA on March 1, Um Sam Ath—a senior official of the Cambodia-based rights group Licadho—said that Hun Sen has set “a good example” by dismissing the deputy governors involved in the crackdown on the villagers, but needs to do more to prevent similar incidents in the future.

In the past, officials have failed to bring suspects to justice for their role in forced evictions, he said.

“It seems that they are working now based only on orders from Hun Sen,” he said, adding that since the salaries of government officials are provided by the taxes villagers pay, they should try to resolve villagers’ problems without waiting for orders from above.

Land disputes are a bitter problem for Cambodia, where rural villagers and urban dwellers alike have been mired in conflicts that the U.N.’s special rapporteur for human rights in Cambodia has warned could threaten the country’s stability.