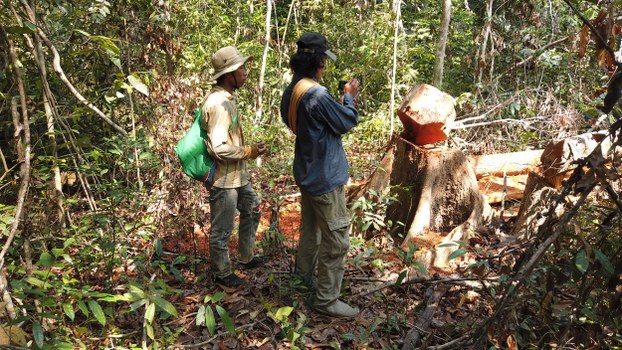 Lovers of the Environment

A new Cambodian government directive to end illegal logging is merely a “show” aimed at shedding its reputation of being too soft on forest crimes, indigenous groups and NGOs said on Thursday, a day after a survey by U.S. and EU monitors showed a major national forest lost more than one football pitch (1.76 acres) of woodlands every hour of 2019.

On June 19, Minister of Agriculture Veng Sakhon issued a statement asking all provincial agriculture directors to take action against illegal logging, land encroachment, and forest destruction according to the law.

“Illegal fishing, illegal logging, and illegal encroachment on state land remarkably continues to exist in a few provinces, so in order to ensure effective management—especially of forests and fisheries—the Ministry of Agriculture calls on provincial and municipal agriculture officers to take action to prevent and crack down on [these violations] through any means necessary,” the statement said.

The directive did not include any details about illegal logging or other forest crimes.

Heng Sros, an activist with the group Lovers of the Environment, told RFA’s Khmer Service on Thursday that the ministry is “incapable” of addressing the problems it claims to be tackling.

“Even though the ministry wants to fix its reputation by issuing the statement, we activists see it as just a show that won’t result in action [on illegal logging],” he said.

He said illegal logging is “in full swing right now,” including through state and communal land encroachment in the province—much of which is protected by local authorities.

“Illegal logging has continued nonstop on a daily basis under the protection of rich and powerful people,” he said. “Even if measures are taken, they will not be effective.”

Another villager in Ratanakiri province named Kham Nin told RFA he has no faith in the ministry to effectively implement the law because local authorities are the ones involved in forest crimes.

He said that meanwhile, his local community forest is being destroyed and illegally occupied by speculators.

“The forest has become a desert because local authorities won’t implement the law according to the central government,” he said.

“They collude with businessmen and disregard the law because they only care about money.”

Bey Vanny, the coordinator for Cambodian rights group Adhoc in Stung Treng province, told RFA that he has only ever observed authorities crack down on illegal loggers who have no connection with powerful people, while letting those with money or government positions off the hook.

“We want the law to be applied equally because we have only ever observed action taken against the poor,” he said.

Local authorities in Cambodia don’t only look the other way when forest crimes take place, they also regularly target environmental activists who are working to stop them from happening.

In April, activists with Lovers of the Environment patrolling Prey Lang forest in Cambodia’s central plains said authorities interfered with their work and even tried to arrest them after they documented a local company conducting extensive illegal logging in the protected area.

The University of Copenhagen said Wednesday that documentation which corresponds with satellite imagery from the EU Joint Research Centre and Global Land Analysis & Discovery (GLAD) - University of Maryland showed that Cambodia lost the 10thmost forest of any nation last year at 63,000 hectares (155,675 acres).

Cambodia has lost 26 percent of its tree cover since 2000, it added, at an equivalent to 2.3 million hectares (5.7 million acres).

Meanwhile, the university said, Prey Lang lost 7,510 hectares (18,560 acres) in 2019, which was a 73 percent increase from previous year and marked the highest rate of deforestation since 2016, when the sanctuary was declared.

Prey Lang lost more than one football pitch (1.76 acres) every hour in the entire year of 2019, it said.