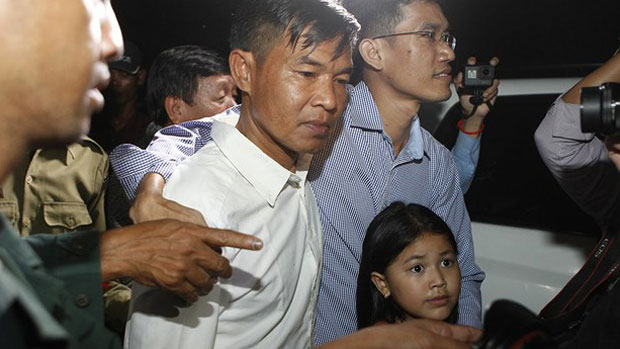 Two former Radio Free Asia reporters charged in Cambodia with espionage and the production of pornography have appealed a court’s decision on Oct. 3 to reinvestigate their case, saying the continued delays in reaching a verdict in their trial have left them stressed and unable to work.

Speaking on Thursday to RFA’s Khmer Service, Sam Chamroeun—an attorney for Uon Chhin and Yeang Sothearin—said he had filed an appeal on Oct. 14, urging the court to quickly conclude the case against his clients based on evidence already collected.

“We don’t know now when the court will be able to begin a new trial [based on the results of a new investigation],” he said.

Sam Chamroeun said that his clients, now free on bail while awaiting the outcome of their case, are suffering emotionally from stress and have been unable to find work due to the uncertainty of their situation.

“They don’t know when they will be cleared of the charges in this case, and they can’t seek employment or earn a stable income,” he said.

Also speaking to RFA, senior Licadho rights group official Am Sam Ath said that the court trying the case in Cambodia’s capital Phnom Penh has so far not found enough evidence on which to convict the two former reporters.

The court has considered their case for nearly two years, “and that should be enough,” he said.

“We have monitored this case from the beginning, and there is no evidence that they committed any crime. I believe the Appeals Court will dismiss the reinvestigation order from the court in Phnom Penh and will drop the charges against the two ex-reporters.”

Attack on the media

Sothearin and Chhin, who had worked as stringers for RFA, were taken into custody in November 2017 and charged with “illegally collecting information for a foreign source” under Article 445 of the Criminal Code.

Production of pornography were later added to the charges against them, and they face a prison term of from seven to 15 years.

Both journalists have maintained that they are innocent of the charges against them, and say they will be vindicated through the courts, while local and international rights groups have condemned their arrests as part of a wider attack on the media in Cambodia and called for their release.

Hun Sen's government has throughout 2019 harassed and threatened CNRP members, arresting 30, while subjecting at least 160 others to questioning by court or local authorities.

The arrest of Chhin and Sothearin came after a warning from Cambodia’s Ministries of Information and Interior that any journalists still working for RFA after its office in the capital closed would be treated as spies.

They were released on bail in August last year, but were placed under court supervision, which barred them from changing their addresses or traveling abroad, and required them to check in with their local police station once a month.

Cambodian journalists working for RFA had reported over the years on corruption, illegal logging, and forced evictions, among other stories largely ignored by pro-government media, and authorities had already closed independent radio stations carrying RFA reports, using a pretext of tax and administrative violations.

Paris-based Reporters Without Borders ranked Cambodia 142nd out of 180 countries in its 2018 World Press Freedom Index, down from 132nd in 2017, citing the crackdown on independent media in the lead up to last year’s election.